Arsenal welcome the Greek champions Olympiakos on Tuesday looking for their victory in Group F of the Champions League. Failure to beat Olympiakos would be catastrophic for the Gunners’ chances of progressing to the knockout stages. Read below our ARSENAL v OLYMPIAKOS match preview with betting tips, predictions, odds, team news, probable lineups, free bets and no deposit bonuses!

Arsenal were surprisingly defeated 2-1 by Dinamo Zagreb on matchday one two weeks ago. That loss has been followed by a 2-0 reversal at the home of London rivals Chelsea and a brilliant win over Tottenham in the Capital One Cup before to record an Alexis Sanchez-inspired 5-2 win over Leicester City on Saturday.

Theo Walcott was impressive in a central role last time out, and he is likely to start since Olivier Giroud is suspended after he was sent-off in Zagreb. Francis Coquelin is a doubt while Mathieu Flamini, though, is now missing after he suffered a hamstring problem during the win over Leicester. Aaron Ramsey could move back into the middle with Alex Oxlade-Chamberlain give a starting berth out wide. There is still no Danny Welbeck and Jack Wilshere will be out for a further 12 weeks having had another operation. 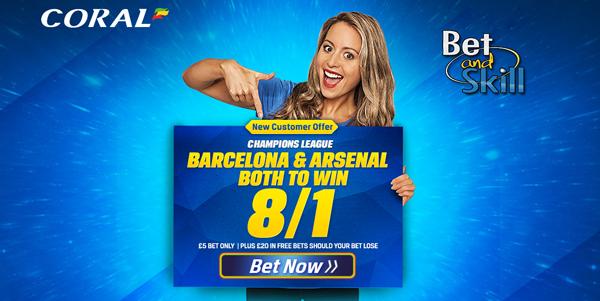 Olympiacos also tasted defeat in losing 3-0 at home to Bayern Munich in their Champions League opener – but it was their only loss of 2015-16 so far as the club have a 100% record from their first five outings in the league, including an emphatic 5-1 victory over PAS Giannina at the weekend.

For the visitors, Alejandro Dominguez is likely return to action but Luka Milivojevic is suspended and will miss the match. Coach Marco Silva will be boosted by the surprise return from injury of Manuel da Costa. Andreas Bouchalakis misses out with a thigh injury and Giannis Maniatis is still working on regaining match fitness following a lengthy absence with a knee problem.

This is the 7th direct match in Champions League between the two sides (all in the last 7 years). All six of their previous encounters in the Champions League have ended in a home win. Olympiakos have lost on their last 12 visits to England, scoring just three times and conceding 37.