Arsenal are set to crash out of the Champions League at the first knockout round for the seventh consecutive season. The Gunners visited Munich for the first leg a couple of weeks ago and they suffered a 5-1 hammering defeat. This means they have to win this return game 4-0 in order to reach the quarter-finals of the Champions League. They won 2-0 the last time they entertained Bayern Munich at the Emirates Stadium but a similar result won't be enough to progress. Furthremore, a timid display at Liverpool on Saturday saw Arsene Wenger's side beaten 3-1, meaning they  have lost four of their last six, with one of their two wins coming at lowly Sutton United in the FA Cup. The Gunners are 5th in the Premier League standings and could decide to focus all their energies on chasing a domestic top 4 finish.

Santi Cazorla and Mohamed Elneny are both ruled out, and Aaron Ramsey is not ready to play a high-level game like this. As a result, Granit Xhaka and Francis Coquelin are expected to start in midfield. Mesut Ozil missed the Liverpool match through illness and while is his back in training, will miss out on Tuesday. Olivier Giroud will spearhead the attack while Alexis Sanchez will be reinstated in the offensive midfield trio alongside Alex Iwobi and Alex Oxlade-Chamberlain. The likes of Theo Walcott, Danny Welbeck and Lucas Perez provide further options up front. David Ospina can be expected to start between the sticks in order to give Petr Cech some rest. 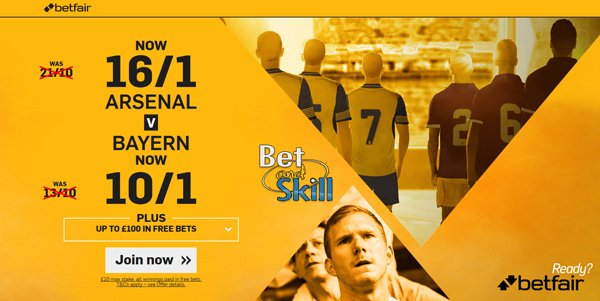 Bayern Munich, who eliminated Arsenal in the last-16 in 2012/13 and 2013/14 seasons, are on a fine run of form having failed to win just two of their last 16 competitive fixtures. The Bavarians are firing all cylinders in recent weeks - Hamburg were dismembered in an 8-0 stroll, and Schalke were swatted aside 3-0 in the DFB Cup quarter-finals. Carlo Ancelotti's men went on to beat 3-0 FC Koln at the weekend, extending their lead at the top of the Bundesliga to seven points. Bayern suffered two away fixtures in the Champions League group stage, 1-0 at Atletico Madrid and more surprisingly 3-2 at Rostov and they have won just one of their last six Champions League road trips.

Philipp Lahm is suspended for the Bavarians and will be replaced by Rafinha while  centre-back Jerome Boateng remains sidelined. The likes of Mats Hummels, Xabi Alonso, Arjen Robben and Franck Ribery could all return to the starting XI having been benched last time out with the Arsenal clash in mind. Robert Lewandowski, of course, will play as central striker. Renato Sanches, Douglas Costa and goalkeeper Manuel Neuer are all major doubts.