Australia take on Argentina in the Semi-finals of the 2015 Rugby World Cup and will be hopeful of advancing into the Final where they will face the All Blacks. This article contains our ARGENTINA v AUSTRALIA betting preview with free tips, match predictions, enhanced odds, starting XVs, betting promotions and no deposit bonuses!

ARGENTINA v AUSTRALIA BETTING PREVIEW
Argentina finished as runners-up in Pool C - as they were beaten by New Zealand. The Pumas were too strong for Ireland in their quarter-final as they romped to a 43-20 success in Cardiff. They stormed into a 20-3 lead, led 20-10 at half time and after Ireland threatened a mighty comeback early in the second half, the Pumas pulled away again. They have had arguably the best scrum in the tournament so far.

The Pumas have made just one change to the team that beat Ireland with Marcelo Bosch coming in at centre in place of Matias Moroni, while captain Agustin Creevy has passed a fitness test following a leg injury. Juan Figallo has been preferred to Juan Pablo Orlandi on the bench.

Pool A was the most competitive on paper, but ended up being a walk in the park for Australia, who won all four group matches. Anyway, hey were heavily tested by Scotland in the quarter-final when despite scoring five tries, they needed a late penalty to edge home 35-34 at Twickenham.

The only missing out  for the Wallabies is prop Scott Sio who picked up an elbow knock and will be replaced by James Slipper. Team star Israel Folau missed the quarter-final win over Scotland with an ankle problem, but he has now been cleared to return and will line up against Argentina at Twickenham on Sunday. David Pocock also missed last but has been deemed fit and will start the match. Ben McCalman and Kurtley Beale have been dropped to the bench.

The Wallabies have won ten of their last eleven against Argentina, but that solitary defeat came just last year. Most of their clashes in the Rugby Championship have been close, with two notable exceptions, and given their current form, it should be the same again in this one. 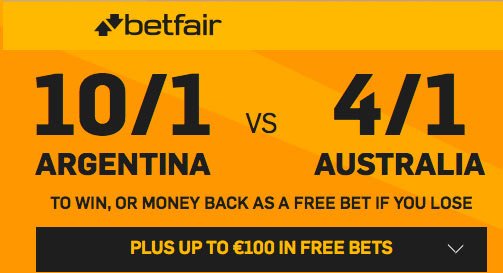