The 2015 Wimbledon Championships start on Monday 29th June when the world's best tennis players will fight to win the most important tournament of the season. Who will win the men's singles tournament? Find here our 2015 Wimbledon men's tournament betting preview with tips, predictions, enhanced odds, exclusive free bets and bookie offers!

Defending champion and world number one Novak Djokovic will obviously have been disappointed with his loss to Wawrinka in the French Open final. He reached at least the Wimbledon semi-final stage in the last four years, including winning two of the three finals he made in that time. The Serb is in the midst of an amazing year (43-4 year to date) and if anything that loss should provide added motivation. His draw has been really interesting and Djokovic should have the 1st quarter wrapped up comfortably.

Andy Murray has been in outstanding form during the grass court season to date. He lost to Djokovic in five sets at the French Open, but he has not lost since and he claimed his fourth Queen’s title last week. And the last time Murray won at Queens, he lifted the Wimbledon Trophy a fortnight later. The Scot is 47-7 this year. His potential route to the final could include Tsonga in L16, Nadal in quarter finals, Federer in semi-final and Djokovic in the final.

Roger Federer is still an outstanding player on Grass and he made it all the way to the final last year when he was beat by Djokovic. The Swiss Maestro comes into this tournament with fantastic form as he won in Halle on Sunday defeating Andreas Seppi 7-6, 6-4. He may not be seriously challenged until a potential quarterfinals matchup with No. 6 Tomas Berdych.

Stan Wawrinka doesn’t have a good record at the Wimbledon but his win at French Open should have given him confidence. Anyway, he  is not a grass court specialist by any means and last year was the first time he made it to the quarter finals at Wimbledon.

Nobody outside the big four have won at Wimbledon for a decade. So it is very unlikely to see someone breaking the sequence.

Anyway, this year we have Rafa Nadal starting as 5th favourite in the outright winner market. The Spaniard  may have dropped to tenth in the rankings for the first time in a decade but a win at Stuttgart will have given him confidence. Anyway, he was beaten by Alexandr Dolgopolov in the 1st round of Queens.

Grigor Dimitrov has a poor overall record at Grand Slams, but he loves grass and he made it to the semi-finals 12 months ago.

Jo-Wilfried Tsonga is also a very solid grass court player. He is 59-18 lifetime on the surface, and has had solid showings in past Wimbledon appearances.

Nyck Kyrgios has a pretty solid grass record, having a 20-8 career record on the surface. Last year he defeated then-world number one Rafael Nadal before losing to Raonic in the last eight.

Milos Raonic loves the court speeds at Wimbledon but his career record on grass is 18-14 which isn’t outstanding.

Other guys in the draw to watch out for are Kei Nishikori and Tomas Berdych but we will be surprised to see one of these two guys reaching the semifinals. 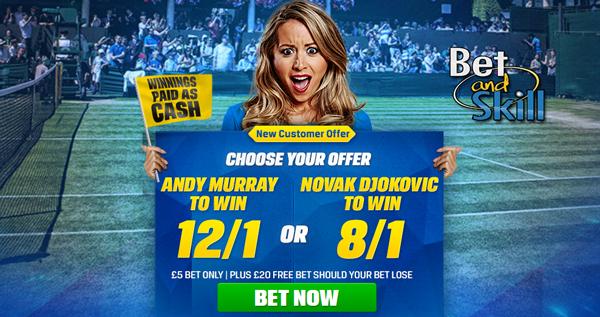 Double the winnings on your outright bets

Free bet if one leg of your acca lets you down

Money back if Federer wins the tournament

Money back if your player loses in a 5th set decider!

Money back if one leg of your Wimbledon treble loses!