Spain and Chile will lock horns at the emblematic Estádio Maracanã in Rio de Janeiro on Wednesday night. A must-win match for the defending champions. Find below our complete SPAIN v CHILE betting preview with tips, predictions, best odds, probable line-ups, free bets and no deposit bonuses on the match!

Spain come into this clash knowing that they will almost certainly have to win the game to stand a chance of qualification since they have lost 5-1 against Netherlands on Friday evening. The Spanish defensive line had a night to forget and Casillas, in particular, will certainly remember that match forever. The goalkeeper definetely showed the world why he was benched by Mourinho and Ancelotti.

Captain Iker Casillas is expected to keep his place in goal despite a performance he described as the worst of his career, with David De Gea out of this match and possibly the rest of the competition with a hip injury. Diego Costa caused the Dutch some problems but his overall performance was not the most convincing, so Fernando Torres might replace him.

Chile secured a comfortable 3-1 victory over Australia in the first round. They were bright with Sanchez, Vargas and Valdivia in particular creating a lot of goal chances. La Roja was in control of the game very early at 2-0 up but Australia pulled one back before the break and in the end it was nervy stuff until a 90th minute goal restored the two goal cushion.

Arturo Vidal lasted an hour in Cuiaba on his comeback from a knee operation but will retain his spot. Sampaoli may consider bringing in Francisco Silva at centre-back, but he is expected to continue with Gary Medel and Eugenio Mena as his central defensive pairing.

Spain have won just one of their last five internationals played a neutral venue but they are undefeated in ten previous matches against the South Americans. They have also not lost back to back international matches since October of 2006 either.

These two teams met in a friendly in Chile in September 2013 and the game finished 2-2. They also met in the group stage in the 2010 World Cup finals in South Africa. It was the final match in the group and Spain (who had lost their opening game 1-0 to Switzerland) won it 2-1 but both teams went through to the last 16.

Money back if there is a red card! 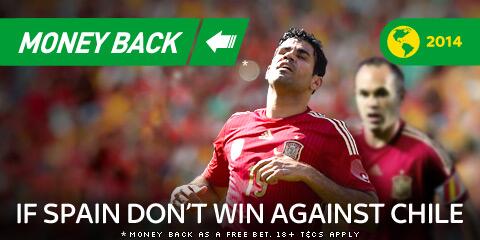