The Epsom Derby, one of the most prestigious horse race in the world, will be run on Saturday 6h June 2015 and we have 12 colts lining up to win a cool £1,325,000 prize. This article contains our 2015 Epsom Derby betting preview with tips, predictions, enhanced odds offers, betting trends and no deposit bonuses. 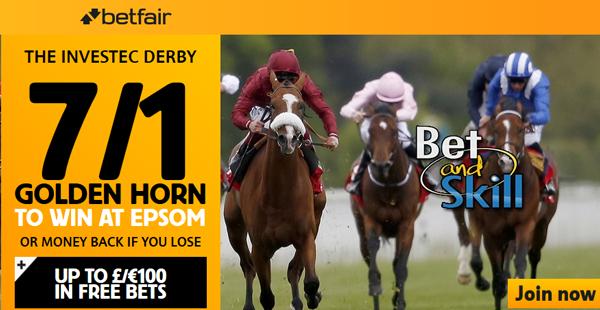 The favourite Golden Horn went from winning his maiden to a Listed event before scoring in the Dante, a significant Derby trial. His dominant York victory has persuaded connections to pay the £75,000 supplementary entry fee. William Buick was in the saddle that day with Frankie Dettori on the runner-up, Jack Hobbs. The roles are reversed here.  He ticks plenty boxes, there are no negatives and as the betting suggests, Golden Horn is the one to beat.

Jack Hobbs stayed on to take second place in the Dante after recording a sensational handicap win at Sandown in April. His trainer John Gosden has called him "a mighty improving horse" and with the step up in trip supposedly promising to suit he may well get closer to Golden Horn.

Elm Park is last season’s Racing Post Trophy winner. This colt made a pleasing comeback when 3rd in the Dante, albeit he was beaten a fair distance in the end. He needs to improve on his third place in the Dante behind Golden Horn and Jack Hobbs to reverse the form with those rivals. Furthermore, he looked uncomfortable on his reconnaissance mission on the Downs and may prove a greater force on a more conventional track.

Giovanni Canaletto was runner-up in the Group 3 Gallinule Stakes at the Curragh on May 24. He has the perfect pedigree: he's by the successful sire Galileo - who won the race in 2001 - and he's the brother of the 2013 winner, Ruler Of The World.

Hans Holbein is one of the few runners with proven form over a mile and a half and arguably the pick of Aidan O’Brien’s trio. He has demonstrated that stamina won't be a problem when staying on strongly to land the 1m 4f Chester Vase.

Kilimanjaro is the winner of the Listed Lingfield Derby Trial. He has shown much improved form since being fitted with a hood but his trial looked weak compared to the Dante Stakes.

Storm The Stars could be the one to make the frame at larger odds and shouldn't be underestimated for the in-form William Haggas.

Epicuris was unbeaten in three starts last year, which culminated in a two and a half-length victory in the Group One Criterium de Saint-Cloud in November. He was well beaten when going down by four lengths to Silverwave in a Group 3 race at Longchamp last April and refused to enter the stalls ahead of the Group Two Prix Greffulhe at Saint-Cloud on 5th May.

Another supplementary entry is the Irish colt Success Days who has landed two of Ireland's leading Derby trials - the Group Three Ballysax Stakes and the Group Three Derrinstown Stud Derby Trial, both run over 10 furlongs at Leopardstown.

Moheet ran better than his finishing position suggested when 8th  in the QIPCO 2000 Guineas at Newmarket behind Gleneagles but could be one of the more interesting outsiders..

German-trained Rogue Runner has won on his seasonal reappearance at Hoppegarten in April before finding the going too testing when fifth in a Group Three contest over 10 furlongs at Frankfurt on May 3.

Carbon Dating is a massive outsider. He is yet to win a race and indeed has only beaten one runner in his last three outings. 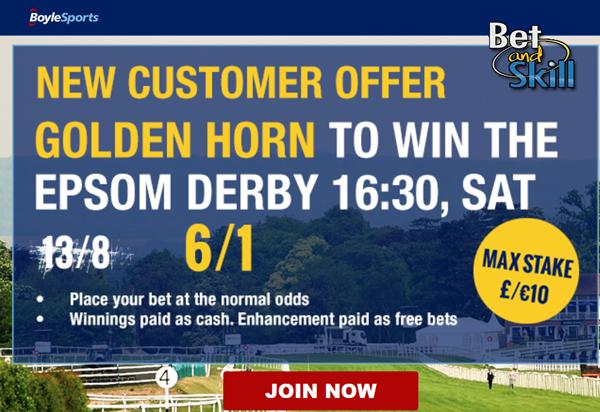 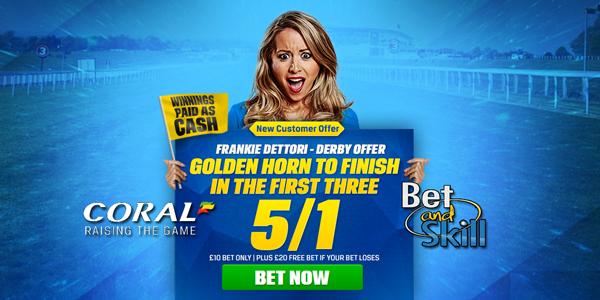