England U21's look to make it two wins in a row in the European Championships this Thursday as they face the hosts Poland in their final Group A match. Read below our England U21 v Poland U21 betting preview with predictions, betting tips, expected lineups, team news, best odds, exclusive promotions and no deposit Free bets on the U21 Euros!

England U21 come into this clash on a high after picking up a hugely important 2-1 victory over Slovakia on Monday, overturning a first-half deficit with Alfie Mawson and Nathan Redmond scoring after the break. They opened their Euro U21 Championship with a goalless draw against current title holders sweden, meanign that the Young Lions are three a point clear of Slovakia at the summit of the group and will seal top spot in Group A in case of victory over the hosts. Aidy Boothroyd's men have lost just two games in all competitions since June 2015.

England will rely on target man Tammy Abraham up front again while Jacob Murphy made a great impact after coming on against Slovakia and should feature from the off in the offensive midfield trio. Nathan Redmond, of course, will retain his spot as well as Lewis Baker, with Demarai Gray providing a further option out wide. Nathaniel Chalobah and James Ward-Prowse are likely to play in the middle of the park while the four man defense should be unchanged - Alfie Mawson and Calum Chambers as centre backs, Ben Chilwell and Mason Holgate as full backs.

Poland are rock bottom of Group A with just one point from their opening two games and are unlikely to qualify from here. They failed to take advantage of a first-minute strike when losing 2-1 to Slovakia and only managed to draw 2-2 against Sweden, courtesy of an injury-time penalty scored by Lech Poznan forward David Kownacki. Marcin Dorna’s men need to win while hoping that the other match in Group A between Sweden and Slovakia ends in a draw to have any chance of progressing. Poland have thrown away winning positions in both of their opening two matches at Euro 2017. Their defense is highly vulnerable as the Poles have not kept a clean sheet in any of their last four games.

The Poles may rely on creative midfielder Patryk Lipski for their own impetus in attacking areas. The Ruch Chorzow no. 10 will play in the middle of the park alongside Sampdoria Karol Linetty and Pawel Dawidowicz. Up front, Bartosz Kaputska and Dawid Kownacki will start out wide while Mariusz Stepinski will be the central striker.

ENGLAND U21 v POLAND U21 PREDICTIONS 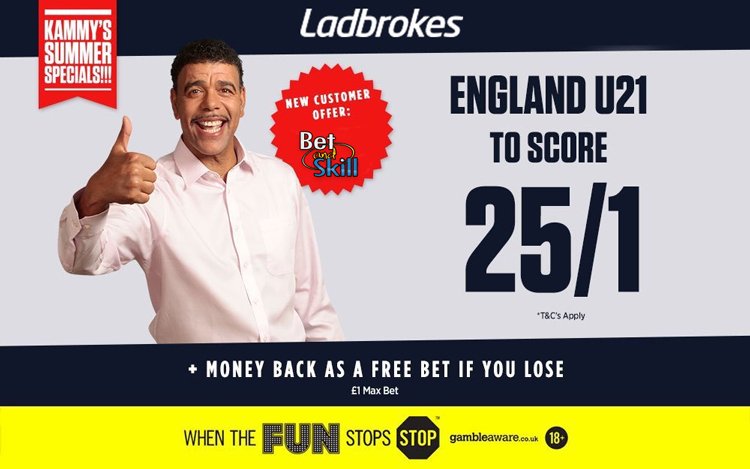 18+ Play Safe. Available online (Max £10 per customer) & in Shop (Plus customers only, max £10 per customer) begambleaware.org. T&Cs apply.
The prize value displayed for six correct predictions is the maximum available based on a single winner and will be reduced in the event of a shared prize-pool. New and eligible UK and Ireland customers only. T&Cs apply. 18+. begambleaware.org. #ad
*New members. Sportsbook only. £10 min deposit & bet on sportsbook, placed & settled at 1.5 min odds within 14 days of sign-up. Win part of E/W bets. 2 non-withdrawable £10 Free Bet Tokens: accept in 7 days, valid for 7 days from acceptance (ex. E/Ws & Multiples), stakes not returned. 18+ Full Terms Apply. BeGambleAware.org.
18+. New Players Only. Place 5 x £10+ bets at odds above evens (2.00) to receive a £10 free bet within 48 hours of settlement. Place five further bets at odds above evens (2.00) to receive a free bet based on your average stake. Full Terms Apply. BeGambleAware.org.
18+. New Players only. Max. Free Bet Token amount: £10.Minimum Deposit: £15. Minimum wagering on Sport to activate the Free Bet Token: £15. Full Terms Apply. BeGambleAware.org.
QuinnBet will refund 50% of your first days losses as a Free Bet up to £35 Plus 10 Free Spins on Reel Diamonds. Minimum 3 bets at odds of Evens (2.0) +.If your account is up, you're guaranteed a £5 Free Bet Plus 10 Free Spins. Minimum 1 bet of £10 or more at odds of Evens (2.0) +. T&Cs apply | 18+ BeGambleAware. New UK Customers Only. | gamstop.co.uk | Play Responsibly

New Customers only. Bet £10* & Get £50* in Free Bets. Sign up, deposit between £5* and £10* to your account and bet365 will give you five times that value in Free Bets when you place qualifying bets to the same value and they are settled. Free Bets are paid as Bet Credits. Min odds/bet and payment method exclusions apply. Returns exclude Bet Credits stake. T&Cs, time limits & exclusions apply. begambleaware.org. #ad
New Customer offer. Place a min £10 bet on the Sportsbook on odds of min 1/2 (1.5), get £30 in Free Bets. Rewards valid for 30 days. SMS verification required. Only deposits via cards will qualify. T&Cs apply. Please Gamble Responsibly. begambleaware.org
New 18+ UK customers only. Register using the promo code WELCOME40, deposit and place first bet of £10+ on Sports (cumulative Evens+) within 7 days of registration. First bet must be on Sports. £30 in Free Bets and £10 in Free Spins (50x20p) credited within 10 hours of bet settlement. Free Bet stakes are not included in any returns. Bonuses have a 7-day expiry. Payment restrictions apply. SMS verification and/or Proof of I.D and address may be required. Full T&Cs apply.
18+. Play Safe. From 00:01 on 13.04.2022. £30 bonus with bonus code R30 or £40 bonus with bonus code P40 (only mobile). New customers only. Minimum £10 stake on odds of 1/2 (1.5) or greater on sportsbook. Further terms apply. #ad
£/€10 deposit using promo code "10FREE" - First bet must be placed on horse racing - Minimum stake £/€10 at odds of 1/2 (1.5) - Free bets credited upon qualifying bet settlement and expire after 7 days - Free bet stakes not included in returns - Casino Bonus must be claimed within 7 days • To withdraw bonus/related wins, wager the bonus amount 40 times within 14 days • Casino Bonus expires after 60 days - Withdrawal restrictions, payment methods, country & Full T&C’s apply. 18+. BeGambleAware.
18+ New UK+IRE customers. Paypal and certain deposit types and bet types excluded. Min £5 bet within 14 days of account reg at min odds 1/2 = 4 x £5 free bets. Free bets valid for 4 days on sports, stake not returned, restrictions apply. T&Cs apply.