Conor McGregor returns to the Octagon this weekend and bookmaker PariMatch is offering a tasty price boost of 60/1 for Conor McGregor to win! Considering that normal price on the Irishman is EVS, this is an unmissable bargain.
Dustin Poirier vs Conor McGregor 3 is around the corner! The two fighters have already locked horns back in 2014, and last January and the score is 1-1. Will Conor McGregor return to winning ways?

McGregor is slightly underdog with odds of EVS for him to win the third fight of the trilogy but PariMatch bookmaker is upping the ante.. offering a boosted price on the Dubliner!

1. Register with PariMatch for free. It takes no more than two minutes

3. If your bet wins, your bet will be paid out at the normal price and the extra amount credited as free bets. 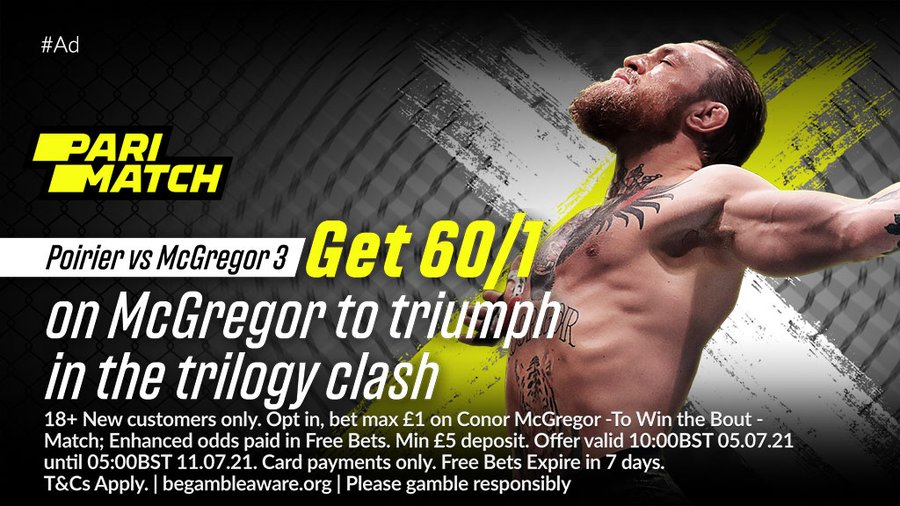 We have collated the best betting offers and price boosts on this fight!

5 reasons to back Conor McGregor to win

Parimatch is one of the oldest bookmakers in Eastern Europe, having been established in 1996 and went online in 2000. The brands is know for many reasons: they have a great reputation offering competitive odds - especially for boxing and UFC.

Not by chance, Conor "Notorious" McGregor and the iconic former boxing champ Mike Tyson act as the international ambassadors of the bookmaker.

Parimatch have recently launched in the United Kingdom (on 1st October 2020). They are now able to accept UK registrations and are taking the UK by storm.