Correctly predict the outcome of all matches in the World Cup and win up to £100 million! BetStars has announced the biggest prize in online sports betting with the launch of the Stars £100 Million Challenge, a free prediction game on the 2018 World Cup. Find here how to enter the contest!

HOW TO PLAY STARS £100 MILLION CHALLENGE

1) Open a new BetStars account via this special link, whether you're on the web, mobile or desktop

2) A free entry for the contest will be automatically credited. Plus, you can gain additional entries by completing challenges at the PokerStars, BetStars and PokerStars Casino

3) Predict the outcome of each match of the Group Stage and determine which teams will advance to the Knockout Stage.

4) Predict which teams will advance through the Knockout Stages until you have chosen your tournament winner.

The possibility of correctly predicting all 64 winners, though, is astronomically high. In that way, the £100 Million Challenge is a similar to a free contest Warren Buffett touted for March Madness several years ago, though that contest had a $1 billion first prize.

Anyway, it's free to play and you can win a whopping £100 million and many other prizes!

If all the World Cup predictions are correct, the winner will take home the lump-sum £100 million bounty, if more than one person wins, the prize will be shared equally.

Every entrant will also be entered onto the Leaderboard Challenge where they can track their correct predictions. Points will be awarded should your prediction wins with prizes available to the top 1,000 finishers, including $10,000 in cash and a $30,000 PokerStars Players No-Limit Hold'em Championship (PSPC) Platinum Pass. 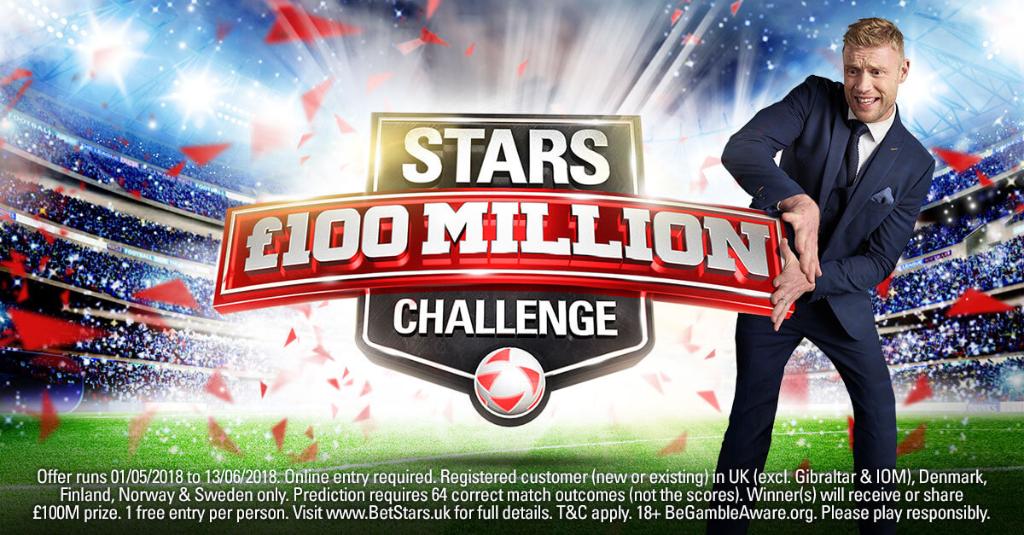 To support the HUGE contest, Stars Group has signed up former cricket star turned television presenter Freddie Flintoff as a brand ambassador, while Danish comedian Casper Christensen and Swedish celebrity chef Per Morberg will front the contest in the Nordic regions.

BetStars is part of the Stars Group,  previously known as Amaya Gaming Group, who is best known for its ownership of PokerStars and Full Tilt. Recently, The Stars Group significantly expanded its presence in the sports betting industry with the acquisition of British-based company Sky Betting and Gaming, owner of brands such as Sky Bet, Oddschecker and fantasy-sports sites. The Stars Group is one of the world’s top providers of technology-based products and services for gambling. The company offers and produces online gambling services and products including a sportsbook, casino, and poker through Stars Interactive, its online gaming division. They have launched many World Cup sports betting promotions, including new Football Frenzy and Spin & Goal game variations at PokerStars.