South Africa are preparing for a hostile reception when they face Scotland in Newcastle for their pivotal Pool B clash on Saturday. This article contains our SOUTH AFRICA v SCOTLAND betting preview with predictions, match tips, enhanced odds, starting XVs, bookie bonuses and no deposit free bets on the match!

SOUTH AFRICA v SCOTLAND BETTING PREVIEW
South Africa thumped Samoa 46-6 at Villa Park last weekend, bouncing back from the shock defeat to Japan in their tournament opener. They know defeat against the Scots could see them on the verge of being knocked out.

The Boks have made three changes to their line up. Jean de Villiers retired from international rugby after he broke his jaw in their recent win over Samoa. Lood de Jager replaces the injured Victor Matfield and Bismarck du Plessis takes over at hooker in place of Adriaan Strauss while Damian de Allende and Jesse Kriel have both been declared fit to start.

Scotland are unbeaten from their opening two matches thanks to wins over Japan and the United States. They found themselves 13-6 down to the USA after the first 40 minutes but once again they came out firing in the second half. Under New Zealand coach Vernon Cotter, Scotland are playing purposeful rugby with good set pieces and lots of enthusiasm.

Coach Vern Cotter has made 10 changes. Fly-half Russell has picked up an ankle knock and will be replaced by Duncan Weir. Blair Cowan goes straight into the starting line-up at flanker after replacing the injured Grant Gilchrist, while Ryan Wilson drops to the bench with Alastair Strokosch missing out altogether.

South Africa have won 11 of the last 12 meetings between the sides, including the last four in a row. Scotland have failed to score a try in their last two games against the Springboks. 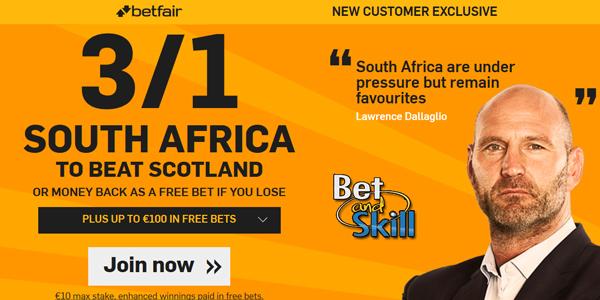