Derek Chisora and Joseph Parker slug it out at Manchester Arena in Manchester on Saturday 1st May 2021 in what should be an intriguing contest between two reheavyweights. Read here our betting preview for Chisora vs Parker, alongside expert predictions, the best odds currently available to back, betting offers and free bets.

When is & How to watch Chisora vs Parker

These two boxers were originally due to meet 18 months ago before a spider bite turned nasty for Parker and ruled him out.

The bout will now take place on Saturday, May 1, and will be held at the AO Arena, Manchester. The WBO Intercontinental heavyweight title is on the line.

Coverage starts live on the Matchroom Boxing YouTube channel at 5pm. Then, coverage on Sky Sports Box Office begins at 6pm. The main event Chisora vs Parker should start around 10:00-10:30 pm.

Subscribers can stream the fight on Sky Sports' official website.

Join Ladbrokes today, get a £/€1 No Deposit Free Bet on ANY Sport!

Derek Chisora (32-10, 23KOs) was last seen in the ring back in October when he came up short against Oleksandr Usyk. He lost via unanimous decision that day but was on the verge of being kncoked out serveral times. That defeat was the tenthof his career, as Del Boys has already lost against the likes of Tyson Fury, Dillian Whyte (twice), Vitali Klitschko, and Kubrat Pulev.

Former WBO heavyweight champion Joseph Parker (28-2, 21 KOs) enters this fight on the back of 4 straight victories. He held the WBO belt for 15 months before being outpointed by Anthony Joshua in a unification clash in 2018 and also lost to Dillian Whyte the same year. On his last outing - back on February - the Kiwi outpointed fellow countryman Junior Fa in Auckland. The New Zealander recently switched trainers and is now under the watchful and astute eye of Andy Lee, who is cousin to WBC champion Tyson Fury. Only three of his 10 reversals came inside the distance.

Chisora vs Parker: Who is Favourite To Win?

Joseph Parker is red hot favourite to win the bout, with Betsafe offering 59/100 for the Kiwi to win. Derek Chisora is backable at 8/5 with William Hill while the draw is available at 25/1 with Betfred.

Looking for enhanced odds? Take a look below... 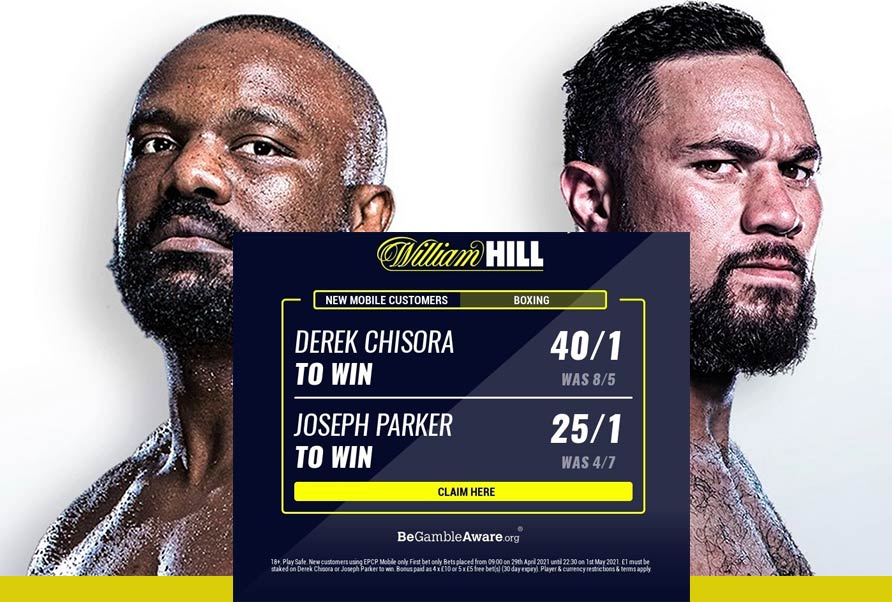 Our Chisora vs Parker Predictions

The Aucklander failed to impress in stopping the overmatched Shawndell Terell Winters and, despite overcoming fellow Kiwi Junior Fa in February. Chisora struggled with Usyk's movement and although New Zealander Parker is not as technically gifted as the Ukrainian, he is a mobile fighter and will pose similar problems. As a result, we expect a decision victory for Joseph Parker.

Max 1 free €/£5 bet per customer. Applies to all pre match Bet Builder bets on each of England’s Euro 2020 group games only. Min 2+ legs. Must have previously deposited with a debit card, Apple Pay or Paysafe to avail of the offer. Excludes shop bets. T&Cs apply.
18+. Online & mobile. One €/£1 Free Bet per person available for a 5-A-Side on Euro 2020 matches only from 10:00 to 20:00. Stake not returned. Cashout excluded. T&Cs apply.
Place a max. £1 bet on Cristiano Ronaldo to have a shot on target vs Germany at the normal odds. Click 'Bet now' to add the selection to your betslip. You'll be paid in cash at the normal odds and topped up to the enhanced price in free bets. T&Cs apply. Paddy's Rewards Club: Get a £10 free bet when you place 5x bets of £10+. T&Cs apply.
18+, Welcome Bonus: New Players only, 1st Deposit, Min Deposit: £10, max £20 free bet valid for 14 days, bets must be placed at odds of 1/1 or greater and be settled within 14 days of placement. System bets no eligible.
Sign up at TonyBet, make your first deposit and receive 100% of this amount as a welcome gift. Bonus code TONY200. Wagering requirements 10x deposit on betting markets with odds of at least 1.65 within 30 days. A player who made a deposit via NETELLER, SKRILL, Paypal or BITCOIN is not eligible for this offer. 18+. T&Cs apply.
18+. New customers only. $/€5 no deposit bonus for mobile verified customers only. Minimum deposit $/€10. Maximum bonus $/€50. Wagering requirements on winnings from bonus x15. Full T&Cs apply.

Switzerland and Turkey go head to head in the final Euro 2020 Group A match  at...

The European Championship is underway, and to upping the ante Ladbrokes are offering you a...