Five year after the first fight and four years after the rematch, Canelo Alvarez and Gennady Golovkin will complete their trilogy at the T-Mobile Arena in Las Vegas. Who will win the trilogy fight? Read here our Canelo vs GGG 3 predictions, best bet, highest odds and exclusive bonuses to use on this unmissable bout!

The much-anticipated bout is scheduled for 12 rounds in the super middleweight division at T-Mobile Arena in Las Vegas.

Fight fans in the United Kingdom will need to be staying up into the early hours of Sunday to catch the two great competitors going one-on-one.

The trilogy bout will be broadcast exclusively live by streaming service DAZN on their pay-per-view platform (DAZN PPV).

Existing subscribers will then be able to purchase the event at an extra cost of £9.99 in the UK while new subscribers will required to pay £16.98 which includes a one-month subscription to the platform.

There are many interesting fights on the undercard, including Jesse Rodriguez against Israel Gonzalez, Ali Akhmedov against Gabriel Rosado and Austin Williams against Kieron Conway.

What happened in the first two fights?

The first fight in September 2017 ended in great controversy.

Going into that one, Gennady was the undefeated unified IBF/WBC/WBA middleweight champion, and Canelo had a rightful claim as the lineal middleweight world champion.

The result being a split draw when most felt that Golovkin had clearly done enough to emerge victorious.

Twelve months later they had a rematch. Golovkin had been stripped by the IBF, so it was his unified WBC/WBA, against Canelo’s valid lineal claim.

Canelo Alvarez won by majority decision. A very close and competitive contest, where again, there were many observers who believed Golovkin deserved to win.

The Mexican has now indicated that he will take the Gennady Golovkin trilogy fight next, then look to the Bivol rematch.

So, who will win the undisputed super middleweight championship? Canelo Alvarez or Gennady Golovkin?

Canelo Alvarez (57-2-2, 39 KOs) be moving back down to super-middleweight and defending his undisputed WBA, WBC, IBF & WBO world titles . He enters this fight on the back of his second career defeat. The Mexican, who stopped IBF super-middleweight champion Caleb Plant in November 2021, ventured back up to light heavyweight to attempt to become a two-time champion last May. Anyway, Canelo lost to WBA Super light heavyweight champ Dmitry Bivol by unanimous decision. His only loss at that time was the one against Floyd Mayweather (split decision), when Canelo was too young to challenge the GOAT. Prior to the Bivol defeat, he went 7-0 since the rematch against Golovkin, beating also the likes of Daniel Jacobs, Sergey Kovalev, Callum Smith, and Billy Joe Saunders.

Canelo can certainly take some lessons from his last performance against Dmitry Bivol. He surely worked on his strategy and footwork during the last few months. Anyway, Golovkin is a much different fighter compared to Bivol, as the Russian light heavyweight champion is much younger and mobile than GGG, and boast a big size advantage. We expect the Mexican working in the pocket, softening up the body with vicious bodywork, trying to either stop the fight or drop his opponent’s hands to open up the head shots.

Gennadiy Golovkin (42-1-1, 37 KOs) has only fought four times since his defeat to the Mexican. He won the IBF and IBO middleweight titles against Sergiy Derevyanchenko in 2019 and beat Ryota Murata (9th round TKO) in Japan most recently to add the WBA (super) middleweight title to his belts just days before turning 40. Though the Kazakh is still a force in his advanced age, he’s slower to get in gear as seen by his struggles against both Sergiy Derevyanchenko and Ryota Murata.

Despite his age, Triple G remains an elite fighter. They say power is the last thing to leave a boxer, but his skills have eroded at least a little bit since they last met 4 years ago. Golovkin had much better success in his first fight against Canelo, where he used power jabs to keep the Mexican on the backfoot, being the aggressor. We expect the Kazakh to use a strategy very similar to the one used by Bivol last time out - constant pressure and wide use of the jab.

This is an intriguing contest with Alvarez coming down in weight while Golovkin gets to go up in weight. Here’s everything you need to know about this huge 168-pound collision in Vegas between two future Hall of Famers.

It’s no surprise that Canelo is the favorite here. Anyway, he’s not as heavy of a betting favorite as in his previous fights and, considering his last bout, his odds look very inflated.

Best price on Canelo to win is 2/9 offered by Betfred. Golovkin is avilable at 4/1 with Bet365 while the draw is backable at 20/1 with Boylesports.

Enhanced odds on this bout will appear here as son as available. 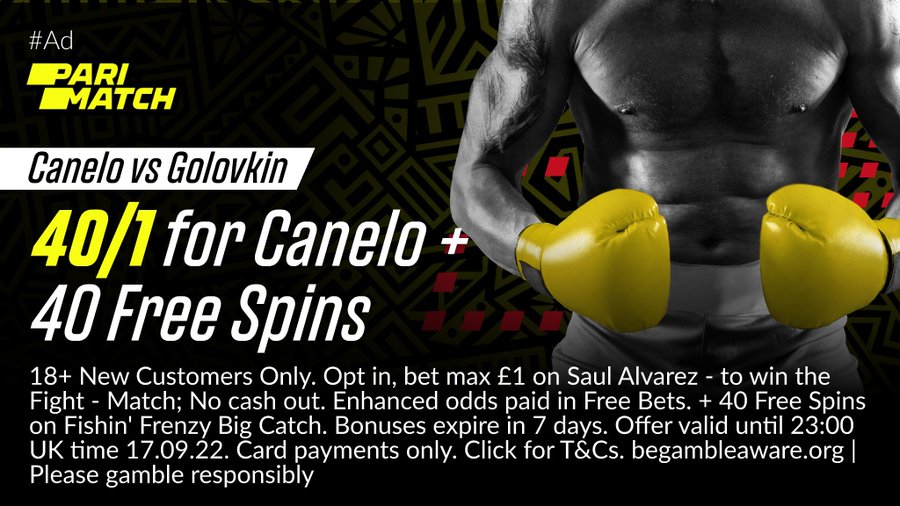 The first two fights have gone the full 12 rounds and both were very levelled. Anyway, Golovkin was much younger and quicker compared to the fighter we saw few months ago. The Kazakh defeated Murata in his last bout but was far from convincing. While there were moments of brilliance, he also looked drained at times. Canelo will be much quicker than last time out, having returned to his natural weight division. His counterpunching capability and speed of is the main reason why we back Canelo Alvarez to win. And this time, the slugfest could not go to the distance. Hence, we also back the Mexican to win by KO, TKO or Disq. As to round betting, Round 11 could be the one in which the referee stops the fight.

Our boxing tipsters regularly bring you expert picks throughout the year! But we don't just provide betting tips on this sport. Want more predictions for the major sporting events of the weekend?

Plus, there’s no best place to find the latest free bets than BetAndSkill. We work with some of the best bookmakers in the country and always bring you the finest of what they are offering....

The prize value displayed for six correct predictions is the maximum available based on a single winner and will be reduced in the event of a shared prize-pool. New and eligible UK and Ireland customers only. T&Cs apply. 18+. begambleaware.org. #ad
*New members. Sportsbook only. £10 min deposit & bet on sportsbook, placed & settled at 1.5 min odds within 14 days of sign-up. Win part of E/W bets. 2 non-withdrawable £10 Free Bet Tokens: accept in 7 days, valid for 7 days from acceptance (ex. E/Ws & Multiples), stakes not returned. 18+ Full Terms Apply. BeGambleAware.org.
18+. New Players Only. Place 5 x £10+ bets at odds above evens (2.00) to receive a £10 free bet within 48 hours of settlement. Place five further bets at odds above evens (2.00) to receive a free bet based on your average stake. Full Terms Apply. BeGambleAware.org.
18+. New Players only. Max. Free Bet Token amount: £10.Minimum Deposit: £15. Minimum wagering on Sport to activate the Free Bet Token: £15. Full Terms Apply. BeGambleAware.org.
QuinnBet will refund 50% of your first days losses as a Free Bet up to £35 Plus 10 Free Spins on Reel Diamonds. Minimum 3 bets at odds of Evens (2.0) +.If your account is up, you're guaranteed a £5 Free Bet Plus 10 Free Spins. Minimum 1 bet of £10 or more at odds of Evens (2.0) +. T&Cs apply | 18+ BeGambleAware. New UK Customers Only. | gamstop.co.uk | Play Responsibly

New Customers only. Bet £10* & Get £50* in Free Bets. Sign up, deposit between £5* and £10* to your account and bet365 will give you five times that value in Free Bets when you place qualifying bets to the same value and they are settled. Free Bets are paid as Bet Credits. Min odds/bet and payment method exclusions apply. Returns exclude Bet Credits stake. T&Cs, time limits & exclusions apply. begambleaware.org. #ad
New Customer offer. Place a min £10 bet on the Sportsbook on odds of min 1/2 (1.5), get £30 in Free Bets. Rewards valid for 30 days. SMS verification required. Only deposits via cards will qualify. T&Cs apply. Please Gamble Responsibly. begambleaware.org
New 18+ UK customers only. Register using the promo code WELCOME40, deposit and place first bet of £10+ on Sports (cumulative Evens+) within 7 days of registration. First bet must be on Sports. £30 in Free Bets and £10 in Free Spins (50x20p) credited within 10 hours of bet settlement. Free Bet stakes are not included in any returns. Bonuses have a 7-day expiry. Payment restrictions apply. SMS verification and/or Proof of I.D and address may be required. Full T&Cs apply.
18+. Play Safe. From 00:01 on 13.04.2022. £30 bonus with bonus code R30 or £40 bonus with bonus code P40 (only mobile). New customers only. Minimum £10 stake on odds of 1/2 (1.5) or greater on sportsbook. Further terms apply. #ad
£/€10 deposit using promo code "10FREE" - First bet must be placed on horse racing - Minimum stake £/€10 at odds of 1/2 (1.5) - Free bets credited upon qualifying bet settlement and expire after 7 days - Free bet stakes not included in returns - Casino Bonus must be claimed within 7 days • To withdraw bonus/related wins, wager the bonus amount 40 times within 14 days • Casino Bonus expires after 60 days - Withdrawal restrictions, payment methods, country & Full T&C’s apply. 18+. BeGambleAware.
18+ New UK+IRE customers. Paypal and certain deposit types and bet types excluded. Min £5 bet within 14 days of account reg at min odds 1/2 = 4 x £5 free bets. Free bets valid for 4 days on sports, stake not returned, restrictions apply. T&Cs apply.

BBC pundit Chris Sutton’s has taken on the challenge from legendary pundit Mark Lawrenson for...