Celtic and Rangers go head to head in the last Old Firm Derby of the season this Sunday with the Bhoys set to record the fourth consecutive win over their bitter rivals this season. Check out here our Celtic v Rangers betting preview with predictions, betting tips, probable lineups, team news, enhanced odds, exclusive promotions and no deposit bonuses on today's matches!

Celtic comfortably top the Scottish Premier League table with just two points dropped all term having posted a W26 D1 L0 record home and away. They are 27 points ahead of second placed Aberdeen in the Scottish Premiership. In the first Old Firm derby in the Scottish Premiership for four years, Celtic ran riot as Moussa Dembele rattled in a hat-trick in a 5-1 success. Since that day the clubs have met two more times and Rangers have put in better performances, losing 1-0 in the League Cup and 2-1 in the league.

Brendan Rodgers will be happy to welcome Patrick Roberts back in the squad, with Gary Mackay-Steven expected to make way in the starting line-up. No other changes to the team are expected. James Forrest returns to the squad having recovered from a knee injury which has kept him out the last two matches. In the middle of the park, Scott Brown and Nir Bitton might start in front of the defence, with Stuart Armstrong playing further up the field. In defence, Dedryck Boyata and Erik Sviatchenko could continue their impressive partnership at the heart of the club’s defence. 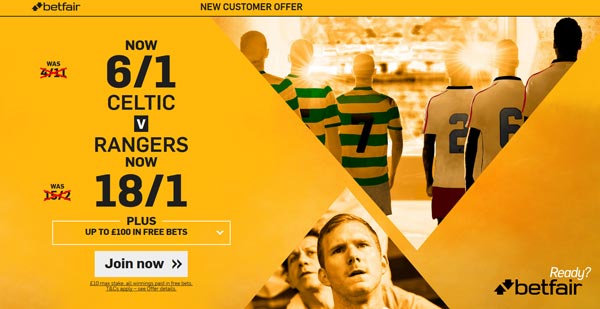 Rangers are still managerless since Mark Warburton left the club last month. Graeme Murty is in charge and two of his first three games ended in defeat. Anyway, the caretaker manager has now led the club to back-to-back victories, following up a 3-2 win over St Johnstone in the league with a 6-0 Scottish Cup demolition of Hamilton Academical. The Rangers sit third in the league standings, 33 point behind their city rivals. They have a pathetic away record, having won just five of their 14 league matches away from Ibrox.

Manager Graeme Murty will be without centre back Rob Kiernan, who was sent off against St Johnstone, whereas Danny Wilson is likely to be recalled to the centre of defence alongside Clint Hill. Joe Garner is also suspended, while midfielders Jordan Rossiter (calf) and Niko Kranjcar (knee) remain on the sidelines.

You can watch and bet on the Old Firm Derby Celtic v Glasgow Rangers live at bet365.com