The last match of the Spanish football season arrives this Saturday as Athletic Bilbao and Barcelona will contest Copa del Rey final at Camp Nou. Will the Catalans win their second piece of domestic silverware or will Athletic Bilbao spring a major upset by ending Barça’s treble quest? Find below our ATHLETIC BILBAO v BARCELONA betting preview with tips, predictions, probable lineups, odds, bookie promotions and no deposit free bets.

In La Liga, Athletic Bilbao ended up seventh in the table, five points adrift of the final Europa League spot and 39 behind Barça. Anyway, they come in good form as they were unbeaten in their final seven matches and put four past Villarreal on the final day of the season.

The Basque team will be missing Oscar de Marcos through suspension, with Andoni Iraola his most likely replacement at right-back. Ager Aketxe could get another start after recent solid form, with Mikel San Jose continuing in midfield after another Spain call up while Aritz Aduriz will lead the offensive line. Iker Muniain, Ander Iturraspe and Jonas Ramalho remain sidelined.

For Barcelona it could act as step two on their way to the treble. The Catalans clinched La Liga title in relatively comfortable fashion with 12 wins and two draws in their final 14 games and progressed to the Champions League final where they will face Juventus on 6th June. The 2:2 draw against Deportivo La Coruna in final fixture of La Liga season ended a six-match domestic winning streak in which they had not conceded a single goal, while they have not been beaten on Spanish soil since February.

Luis Suarez returned to training with the Blaugrana squad on Wednesday but he is doubtful and could be replaced by Pedro. Luis Enrique doesn't have any other injury problems and so Dani Alves should start despite he will probably leave the club this summer, while cup goalkeeper Marc-Andre ter Stegen will come in for Claudio Bravo.

The last time these two sides met there were seven goals scored as Barcelona recorded a 5-2 win at San Mames in February. The Catalans are undefeated in 23 of their last 24 encounters against Los Leones in all competitions, scoring at least 2 goals in 9 of their last 10 direct matches. 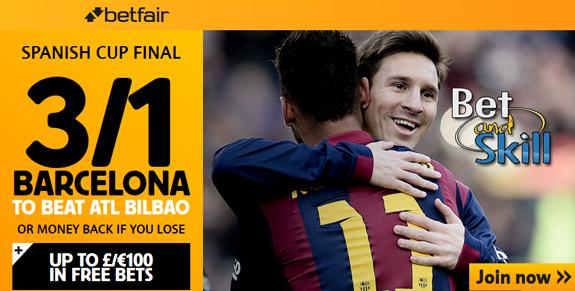