Arsenal moved into the top 4 of the Premier League with a 2-1 victory at Crystal Palace on Saturday, continuing a fine run of form which has seen them win 12 of their last 15 matches. The Gunners finished second to Borussia Dortmund by virtue of an inferior goal difference but they have been dealt a very favourable tie this year. 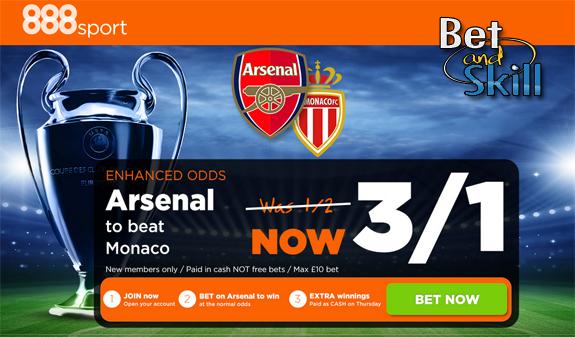 Aaron Ramsey remains in the recovery room, Alex Oxlade-Chamberlain faces a late fitness test while Hector Bellerin has overcome his respective injury. Danny Welbeck is likely to continue to get the nod over Walcott on the right but Jack Wilshere will again have to settle for a place on the bench. Debuchy and Arteta are still injured.

Monaco, who are currently fourth in France's top flight, were likely the weakest of the group winners. They topped their group with the lowest points total, 11, and incredibly scored just four goals in six matches against Bayer Leverkusen, Zenit St Petersburg and Benfica. Anyway, they boast the best defence in this season's competition, having conceding just one goal in their six group stage games. All six of group stage matches saw backers of under 2.5 goals and both teams not to score collect.

Coach Leonardo Jardim faces serious selection problems since Jeremy Toulalan is banned and Andrea Raggi, Lacina Traore, Ricardo Carvalho and Tiemoue Bakayoko are all out through injuries. Furthermore, Layvin Kurzawa picked up an injury at the weekend and is a major doubt as is Yannick Ferreira Carrasco. Berbatov, Kondogbia and Moutinho are all expected to start.

Back in August 2014 Monaco beat Arsenal 1-0 in the pre-season Emirates Cup tournament. The French club have lost just one of their last 10 matches in Ligue 1 while Arsenal have won their last 9 home matches in all competitions.. 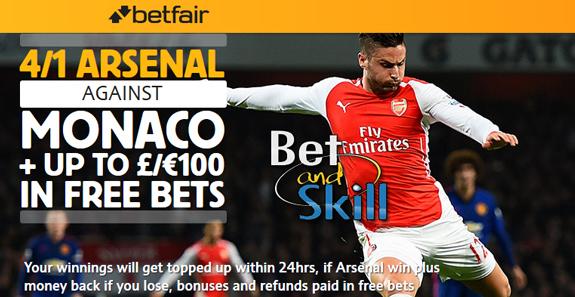 Money back if a goal is scored by a player wearing n.8