Heavyweight champion Anthony Joshua will fight late replacement Carlos Takam on October 28 for the IBF and WBA heavyweight titles in Wales at the Principality Stadium in Cardiff. Can Takam be competitive? This article contains out Anthony Joshua vs Carlos Takam betting preview, including picks, enhanced odds, bookmakers offers and no deposit free bets!

Cameroon-born French fighter Carlos Takam will step into the ring to face Anthony Joshua after the pullout of challenger Kubrat Pulev. The hulking Bulgarian suffered a shoulder injury in sparring and, in the final week of his camp, had to give up a multi-million pound payday. For Joshua, this means he can still fulfil his IBF mandatory defense.

Anthony Joshua boasts an unblemished professional record of 19 KO wins from 19 fights, including a memorable triumph over Wladimir Klitschko at Wembley in April when he climbed off the canvas to send the Ukrainian veteran into retirement in round 11. There’s very few weaknesses in Joshua’s game, although he was knocked down in his last bout and showed some chinks in the armor for the first time in his career. The current world number one has fought a total of 55 rounds from his 19 fights, giving him an average of 2.89 rounds per fight.

Joshua was prepared meticulously for the style and height of Pulev, but he now faces a completely different style and challenge in Takam and this could be a little handicap. AJ will problably take a couple of rounds to size up his new opponent but then up the tempo and blow him away. Once he does get the measure of the challenger his devastating combination of pinpoint accuracy and brutal punching power should result in the African fighter being put away in the first half of the fight.

A former Olympian, Carlos Takam is ranked no.3 in the world by the IBF and has suffered only three defeats in his 12 years as a professional boxer, with one draw and 35 victories. The 36-year-old has 27 knockouts on his resume, though none against any calibre of opponent approaching Joshua's level. Takam enters the fight off the back of two knockout victories but his last tough bout came in May 2016 when he collided with Joseph Parker in an IBF eliminator and lost on points in a very close fight. His other two defeats came in 2009 when Gregory Tony outpointed him, and three years ago when Alexander Povetkin knocked him out. He beat Croatian Ivica Bacurin in Italy last time out, following the fourth round KO of Marcin Rekowski.

In theory, tye heavy-handed 36-year-old French-Cameroonian has the strength and physicality to test Joshua. Anyway, he is a fighter that favours wearing opponents down rather than hunting a one-punch KO. He showed against Parker that he can box well on the back foot and use upper body movement to make foes miss. The problem is that his low hands will afford the heavyweight champion plenty of opportunities to land heavy shots. 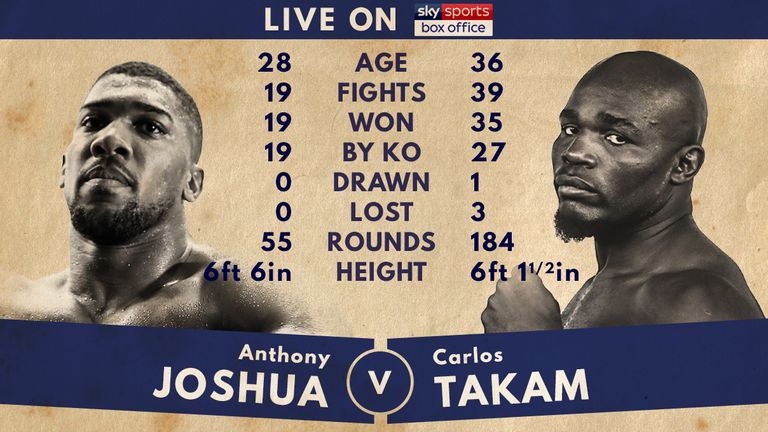