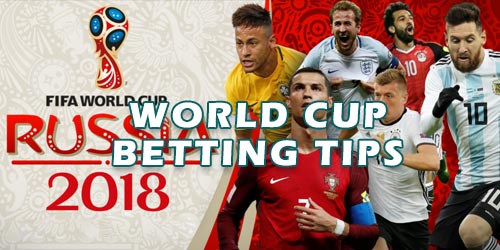 Looking for Outright betting tips on the 2018 World Cup winner? Our tipsters have deeply analysed all the teams who will play in Russia this summer! Wanna know which teams you should put your money on? Read below our World Cup Winner betting tips.

Everyone has their own ideas of who is set to win the World Cup. In fact, most pundits are fairly torn. There are few sides full of real world-class, in-form players this summer, which really does make it anyone’s game.

The Germans have been without Neuer since September, Neymar is still recovering from a metatarsal injury, the Belgians are as yet unproven on the world stage.

There are so many questions to be ask, which is why so many tipsters are pulling away from backing the bookmakers favourite to win the World Cup.

We’re no different. It’s going to take a different sort of nation to step up this summer, and it could well be one of these...

Spain are hardly an underdog, but after a catastrophic World Cup 2014 and a Round of 16 knockout at the Euros, they have an awful lot to prove.

There squad has changed somewhat, yet still contains the familiar base of Sergio Ramos and Gerard Pique, followed by the likes of David Silva, Andres Iniesta and Sergio Busquets.

Most of their squad are going into the tournament in a run of form, none more so than goalkeeper David De Gea.

Goalkeepers really can win tournaments and we’d back Spain’s odds of 13/2 based on him alone.

They won’t have it easy in Group B, but get through that and we wouldn’t be surprised to see them go all the way.

There’s something that’s not really clicked over the past few years with Belgium, almost like they’re 11 superstars rather than a team.

That couldn’t be clearer in their defeat to Wales and Roberto Martinez has worked hard to instil a team ethic ahead of the summer.

Most looking to bet on the World Cup will find them as outsiders at 12/1 with the bookmakers, which makes them ideal for a free bet.

Another side full of in-form players, they’ve got Premier League Champions, FA Cup winners and a striker who has continued to find the net all season. Why wouldn’t you back them this time around?

It’s been 20 years since France last lifted the World Cup. Captain that day was Didier Deschamps, so it seems almost like a fairytale he would lift it as manager two decades on.

The French have a relatively straightforward route into the knockout stages, with Group C betting odds suggesting they’ll have no real challenges.

Top the group and they’d likely face Croatia or Iceland, a side they beat 5-2 in the knockout stages two years ago.

We fancy the French to have built even further from their Final loss at Euro 2016, they’ve added some exciting young talent. The only real issue is the lack of form of Paul Pogba and Hugo Lloris.

Lionel Messi probably has one more World Cup left in him after Russia 2018, but he won’t be wanting to leave it until Qatar to lift it.

In his quest to finish off the trophy cabinet, Argentina could be real threats, particularly going forward.

They have Messi, Sergio Aguero, Gonzalo Higuain and Paulo Dybala within their attack, a force that would terrorise even the strongest of defences.

Reaching the Final four years ago, Paddy Power have them at a large 10/1 to go one better. It’s certainly possible though.

Group D poses few threats and it’ll likely be a favourable tie against Peru or Denmark in the Round of 16. From there on in, anything can happen.

The following are the highest odds on the World Cup Outright Winner market. Click on the 'Bet' button to require the highest available odds on your selected team.

Find below the latest free bets launched by our trusted bookmakers accepting traffic worldwide (except the United States). Get also exclusive welcome offers by entering our special bonus codes:
T&Cs apply. 18+. begambleaware.org.
SHARE IT WITH YOUR FRIENDS
Let your friends know about this article! Share it on your favourite social media!

Please tell us what you think about
"World Cup 2018 Winner Tips: Where You Should Put Your Money"

Get a 100% up to €/£50 Deposit Bonus Immediately
Up to 50% winning boost on acca bets!
Claim Here
New Customers only; Min. deposit £15 (no Skrill/Neteller); Bonus amount is 100% of deposit up to £50; Welcome offers are limited to one per person, family, household address, email address, telephone number, same payment account number (e.g. debit or credit card, Skrill and etc.), shared electronic device (e.g. school, public library, workplace, mobile phone) and shared IP; Wager the qualifying deposit and bonus amount 8x within 30 days to convert bonus winnings into real money; Wagers must be on min. odds of 4/5 on singles or acca bets with min. odds of 2/5 per selection to qualify; Max. stake contribution to wagering requirement is the value of your bonus; Certain bet types are excluded; See full terms; Terms apply; 18+

Get £100 in Social Free Bets With BetBull

Download the social sports betting app
BetBull will credit your account with up to £100 in social free bets!
Claim Here
New customers only. Min Deposit: £20. First deposit matched up to £100 in Social Free Bets. Customers must place bets that match deposit at odds of 1.5+ to unlock social free bets in 5 days after deposit. Full T&Cs Apply

Free £40 Bet if your first bet doesn't win!
Claim Here
£40 First Bet Insurance: New customers only. Qualifying period ends 23:59 GMT on 31/12/19. A qualifying bet is a losing first settled real money single bet of at least £/€10 or more (at odds of evens (2.0) or greater (or a multiple where each selection is at odds of 2/5 (1.4) or more. Only losing win single part of an E/W bet will qualify. Free bet equal to your qualifying stake(Max £/€40) will be credited within 24 hours of qualifying bet settling and must be used within 14 days. Free bet stake not included in returns.

Free Bets (September 2020) - The Best Bookmakers Offers, All On One Page

Get 20/1 Liverpool To Score Vs Chelsea With William Hill

Online Roulette For Real Money - All You Need To Know

Goodwood is available today for betting. Get all the best expert opinions on today's horse...

Are you looking for the best expert tips for today's horse racing meeting in Redcar?...