Saturday night welcomes a huge fight for Dereck Chisora as he potentially faces last chance saloon against Oleksandr Usyk who is fighting in just his second heavyweight bout.

It’s all set to be a real thriller, with Chisora taking on an unbeaten man in a fight he’ll want to avoid taking his losses into double figures.

Below you’ll find our full Chisora vs Usyk betting preview, including our predictions and the best odds to back...

When is Usyk vs Chisora?

Chisora will take on the Ukranian former cruiserweight on Saturday October 31, with a ring walk of around 10pm.

The fight, which will take place at Wembley Arena and was rescheduled from initially being delayed on May 23 due to the pandemic.

The fight is available on Sky Sports Box Office, with plenty of fights also on the undercard.

What is the Venue for Usyk vs Chisora

The fight will be taking place in the Wembley Arena.

Where can I watch Usyk vs Chisora?

The Bout and undercard will be a Sky Box Office pay-per-view event and will be priced at £19.95. Non-subscribers in the UK will be able to purchase the fight and stream online. DAZN subscribers will also be able to stream the fight in other territories.

Who is the Chisora v Usyk Betting Favourite?

It’s a big bout for both these fighters, with Oleksandr Usyk having beaten everyone put in front of him so far during his career. After a solid start in the heavyweight division with the knockout of Chazz Witherspoon, Chisora poses a different prospect though.

That said, Usyk is still a big favourite with the bookies. GentingBet are pricing him at 1/7, with Chisora a 26/5 shot with Unibet. Anyway, bookmaker William Hill is offering BetAndskill readers the chance to back Chisora to beat Usyk @ 80/1!

The Brit has won his last three fights, including a fourth round knockout of David Price this time last year. At this stage of his career, this is likely to be the final run at a shot for a world heavyweight title for Chisora. The Briton will be expected to weigh in around 45 pounds heavier than his opponent on fight night, and Del Boy will likely use his sheer size and power to bludgeon through the defence of the Ukrainian.

Usyk has beaten some excellent fighters in recent years though, including Tony Bellew at cruiserweight and Murat Gassiev.  He boasts an immaculate record of 17 wins and zero losses and 13 of those wins have come via knockout. The southpaw unified the cruiserweight division before stepping up to heavyweight. In his heavyweight debut fight, the Ukraininan beat Chazz Witherspoon, but it was a far from convincing victory.

The knockout for the Ukranian is the favoured method of victory with BetVictor, with a KO/TKO or Disqualification priced at 10/11.

Many online bookmakers are offering enhanced odds on this bout! We have selected the best offers for you!

Usyk has not even fought half as many opponents as Chisora during his career, but The Cat has stormed through the cruiserweight division and has his eyes on some big heavyweight fights.

He has a knockout percentage rate of 76%, while Chisora’s knockout ratio is just short of that with 72% of victories coming this way.

Both fighters haven’t been in action since October last year, so both will want to rid themselves of any ring rust quickly in order to not get caught out. 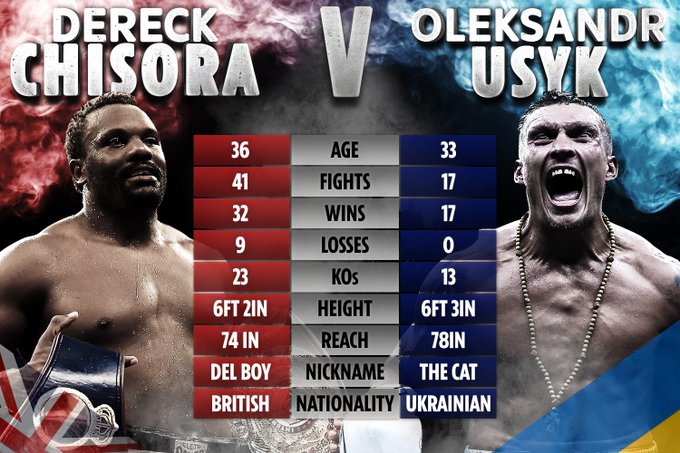 Our Chisora vs Usyk Predictions

Usyk’s record has been breathtaking over the last few years and a win over Chisora will see him continue to climb the heavyweight ladder.

Chisora has taken far too many knocks for us to see him winning this one and an Usyk win by decision or technical decision would by our bet for this one at 6/4 with BetVictor. The TKO may also be worth a punt priced at 2/1, while you may be tempted by a special on Chisora to go down twice in a single round at 5/2.

Our experts regularly bring you boxing expert picks throughout the regular season! But we don't just provide betting tips on this sport. You’ll find tons of daily predictions thorughout BetAndSkill, from football tips for today to horse racing picks, from NFL tips to BTTS predictions.