Tottenham and Arsenal kick off the weekend’s Premier League action in blockbuster fashion. The duo sit second and third in the table and both missed the chance to close the gap to Leicester City on Wednesday. Who will win the North London Derby on Saturday?Find here our TOTTENHAM v ARSENAL betting preview including predictions and betting tips, probable lineups, enhanced odds, bookie offers & no deposit free bets on the North London Derby! 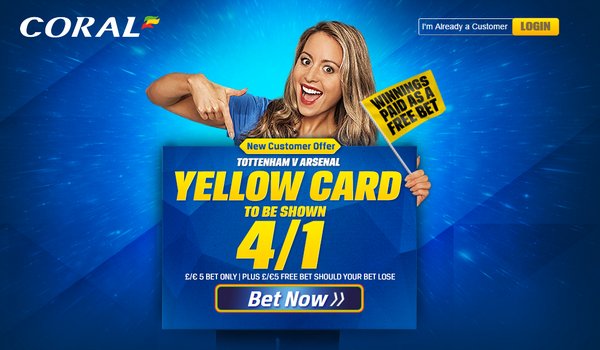 Tottenham come into this fixture off the back of a bloody defeat, 1-0 away at West Ham, in midweek. The Spurs have now lost two and drawn one of their last five matches in all competitions with a 3-0 over FIorentina in Europa League as their only victory in the process. They have won four of their last five league games at White Hart Lane, but all four of those wins came against sides currently in the bottom half and they lost to Leicester in the other match on January 13.

Mousa Dembele is doubtful and if he fails to recover in time, Ryan Mason or Tom Carroll will likely start in the double-pivot. Dele Alli looks fairly certain to come back into the starting XI after playing 30 minutes as a substitute last time out. Harry Kane will lead the line as usual with Heung-Min Son, Erik Lamela and Nacer Chadli in contention for a starting berth in the offensive midfield trio. Clinton N'Jie and Jan Vertonghen are both sidelined.

Arsenal enter this match on the back of a embarassing 0-1 defeat at Emirates Stadium against a struggling Swansea. The Gunner have now lost three matches in a row in all competitions and drawn with Championship side Hull City in the FA Cup. A defeat at White Hart Lane on Sunday would virtually extinguish all hope of the Gunners being crowned champions

Arsene Wenger will be without Petr Cech and Laurent Koscielny for the north London derby against Tottenham, with both players nursing calf injuries. They join Jack Wilshere, Tomas Rosicky, Santi Cazorla, Alex Oxlade-Chamberlain and Mikel Arteta on the sidelines. Francis Coquelin and Aaron Ramsey may line up once more at the base of midfield in Wenger’s standard 4-2-3-1 formation  while Mesut Ozil and Alexis Sanchez will almost certainly form the rest of the attacking midfield trio, with Danny Welbeck perhaps earning a recall.

Arsenal held Spurs to a 1-1 draw at the Emirates when the clubs last met in the league in November, two months after triumphing 1-2 at White Hart Lane in the League Cup. Tottenham have lost just one of their last seven Premier League games against the Gunners at White Hart Lane (W4 D2 L1)