The sixth and final major of the 2020-21 PGA Tour ‘super season’ goes underway on Thursday 15th July as the British Open Championship returns to Royal St George’s Golf Club for the 15th time this year. Who will win the 149th Open Championship? We have tons of betting tips and insights for you! Read here our predictions on the 2021 Open Championship including Winner, First Round Leader, To Miss The Cut, Top 5 Finish, Top 10 Finish, Top American, Top European golfers. Plus we select the best odds and exclusive promotions for you!

Royal St George’s Golf Club: All You Need To Know

Royal St. George’s Golf Club is the most southern of all the Open Championship sites. It has hosted 14 Open Championships and was the first course outside of Scotland to host the tournament back in 1894

From the tee to the hole, this is a very demanding golf course. The famously tall sand dunes necessitate many blind fairways shots. While the fairways can be tough to hold, they are wider than other Open Championship venues.

The golf course is completely exposed to the bay. In windy conditions, like there was in 2003 and 2011, the course is a menace.

When to watch: Live on Sky Sports Main Event and Golf from 6.30am on Thursday

The cut: The top 70 plus ties advance to the third round

Playoff: A three-hole playoff for all players tied for the lead after 72 holes, with playoff continuing as sudden-death if players remain tied after the three holes

US Open Champion John Rahm had a top 10 finish at the Scottish Open despite playing quite poorly. The World No. 1 has still got plenty to prove across the links, with no top-10 finish to his name at the Open Championship in his four efforts to date. The 26-year-old placed inside the top 10 in four of his past six major starts. He turned in his best finish at The Open in 2019, tying for 11th. Since then, he has been a fixture in the top 10 at major tournaments.

Xander Schauffele secured a tie for second behind Francesco Molinari at The Open in 2018. The 27-year-old has nine top-10 finishes at major tournaments since he burst on to the scene in 2017. He enters this tournament with plenty of confidence after taking 10th place at the Scottish Open.

Brooks Koepka has been a model of consistency in recent months after a mixed start to the year. He finished 2nd at this year’s US PGA Championship and 4th the U.S Open. He has three top 10 finishes in six Open Championship appearances.

Louis Oosthuizen won the 2010 edition of the tournament at St Andrews but had a largely forgettable title defence here at St. George's the following year when he failed to finish in the top 50. He has been in quietly confident form throughout the last 18 months, finishing no lower than third in three out of the last five majors. The South African golfer finished runner-up in his last outing on Tour in the U.S. Open. He preceded this with a T8 in the Memorial and a T2 in the PGA Championship.

Rory McIlroy has been in poor form coming into this Open Championship. He also missed the cut at Royal Portrush last time out. Anyway, the County Down-born golfer notched four top-four finishes on the bounce in this particular major before missing the cut in 2019.

Collin Morikawa also struggled over the weekend in Scotland, plummeting to near the bottom of the leaderboard. But the form prior to the Scottish Open was exceptional, with figures that read T4-2-T14-T8-T7-T18. He is already a Major champion, having won last year's US PGA Championship and is one of the best iron players. This could be a deciding factor here at St. George's.

Dustin Johnson has disappointed since winning the Green Jacket at the 2020 Masters. He finished T2 back in 2011 at the Open Championship but struggled to recapture that 2011 challenge in his British Open outings since, with two T9 finishes Johnson’s best showings over the last decade.

Jordan Spieth was the last American to win The British Open in 2017 and has never missed the cut in seven attempts at this tournament. Dating back to 2015, his run also includes a T4, T30,  T9, T20 run. We have seen his overall game come back to life this season, and this will be another spot where we can expect him to be in the mix over the weekend.

Bryson DeChambeau has been one of the hottest players on tour this season, finishing on top of the leaderboard at the 2020 U.S. Open and Arnold Palmer Invitational. Anyway, he has finished outsde the top 25 in five of his last seven starts. DeChambeau is averaging over 320 yards per drive, which ranks first on tour. But he is also hitting fewer than 55 percent of fairways off the tee this season, which can cause plenty of trouble at a major championship.

Paul Casey has had stellar finishes in the two previous majors and a win earlier this season at the Omega Dubai Desert Classic. Ranked 20th in the world, the Englishman has 16 Open Championship appearances to his name, with a T3 in 2010 as his best finish. His stellar iron play and tournament experience make him a golfer to follow.

Phil Mickelson has previous form to call on at this course, finishing T2 back in 2011 behind Darren Clarke. Lefty can't be overlooked. Never.

Alex Noren has been playing fantastic golf recently. He has a top 15 and a top 5 in two of the past three starts and also has a spectacular record at this tournament, finishing 11th in 2019 and earning top 10s in 2017 and 2012.

After tying for 54th on his maiden start, Viktor Hovland recorded top-16 placings in each of his next eight events, including finishes of fourth at the Wyndham Championship and second at the Albertsons Boise Open. He has two seconds and two thirds to his name this year and won the recent BMW International Open.

Lee Westwood recorded back-to-back runner-up finishes against strong fields at the Arnold Palmer Invitational and The Players Championship. He tied for 35th at last week’s Scottish Open but missed the cut at the British Open at Royal St. George’s in 2003 and 2011

Shane Lowry held the trophy for two years but only got one win out of it after the 2020 Open was canceled because of COVID-19. Lowry has played some superb golf over the last four months, raising his game as his title defence approached, starting with eighth spot in the Players Championship at Sawgrass. Fourth place in the US PGA Championship, where he dazzled in round four alongside Ryder Cup captain Padraig Harrington, was another highlight.

Russell Henley has 8 x Top 25’s this season including a T13 in the US Open and a T11 in last week’s John Deere Classic. Zero pressure or expectation makes for a good each way punt.

The section below contains the best betting offers and enhanced odds we have found for the 2021 British Open tournament: 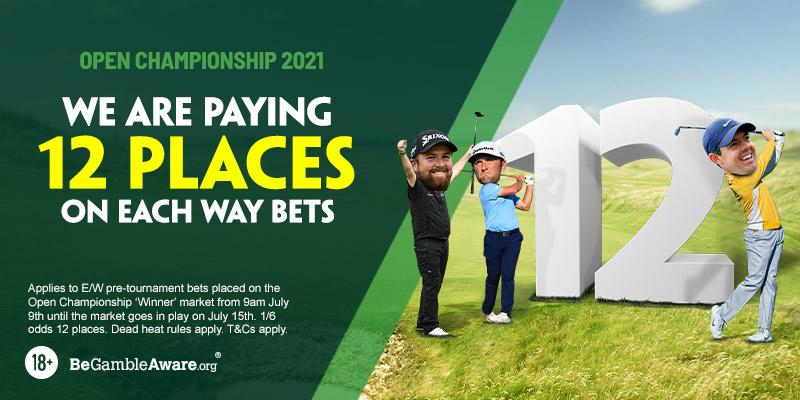 Don't miss our best bets on the British Open Championship 2021. Feel free to copy our Open Championship predictions and expert picks and get the highest odds available on the market by clicking the 'Bet' button! Plus, we invite you to take a look at our Price Boost section to claim enhanced odds on today's events.

Who are the favorites to win the 2021 British Open Championship?

Sadly, Masters champion Hideki Matsuyama has been forced to withdraw after contracting Covid-19, one of 10 players forced out because of the pandemic. Reigning U.S Open champion Jon Rahm enters as the betting favorite. Brooks Koepka, Rory McIlroy, Dustin Johnson, Justin Thomas and Xander Schauffele are other strong candidates, while a host of big-name players are at very juicy odds.

Who are the possible dark horses of this year's tournament?

The tournament was, of course, cancelled 12 month ago because of the pandemic and the great news is that it is being treated as a test event, with 32,000 spectators per day on site.

Who are the recent Open Championship winner at Royal St. Georges?

The last two editions of this tournament at Royal St. Georges produced winners Darren Clarke in 2011, who was 150/1 pre-tournament, and Ben Curtis eight years earlier, who was anywhere from 300/1 to 500/1 beforehand.

What is the claret jug?

The claret jug is arguably golf’s most famous prize, awarded to the British Open winner. It is a lesser-known fact that the Claret Jug’s formal name is The Golf Champion Trophy.

Traditionally, the winner takes a drink from the jug. The winner’s name is engraved on the jug, joining the names of previous champions. They are obliged to return the jug before the next tournament, and at that time, they are given a replica of the trophy.

Are you looking for the best expert tips for today's horse racing meetings in Plumpton?...