The excitement for the F1 2021 season cannot be higher since, for the first time since 1974, the top two drivers in the standings are tied heading into the final race of the Formula 1 season. Lewis Hamilton and Max Verstappen both have 369.5 points, so... Who will win the 2021 Drivers Championship? Read here our F1 betting tips for the final Grand Prix of the season, Hamilton vs Verstappen predictions, odds, free bets and much more.

Top Bookmakers To Bet On Formula 1

No matter who wins on Sunday, it has been an unforgettable battle this year between Max Verstappen and Lewis Hamilton. Both drivers have led at various points of the season, with predictions often being thrown out of the window by on-track drama changing the championship picture.

Hamilton has all of the momentum as the roadshow rocks up to Yas Marina, following those wins in Brazil, Qatar and Saudi Arabia.

Whatever driver you fancy to win the Abu Dhabi GP, you can claim a price boost at William Hill. take a look below...

Who will win the Abu Dhabi GP?

This weekend's Abu Dhabi Grand Prix will determine who will win the 2021 Drivers Championship. Currently, Hamilton is the 8/11 fav with Coral to win the race and Verstappen is predictably second in the betting at 2/1 with Parimatch. The British is the in-form driver having won each of the last three races, with Verstappen runner-up in all three occasions. Last time out in Saudi Arabia, Lewis Hamilton took a hard-fought victory from pole position as Max Verstappen tried his hardest to fend the defending champion off, but to no avail.

Who will win the 2021 F1 Drivers Championship?

Don't forget, it's not necessarily going to be about who wins the race. It's all about who cross the finish line first. That means that one driver could finish 4th, and the other driver finish 6th, and that'd be enough to award the driver that finished fourth this season's Drivers Championship.

Of course, no other drivers will be able to catch the leading duo as the closest opponent, Hamilton's team-mate Valtteri Bottas, has 218 points heading into the final race.

And if you are new to Parimatch, you can claim the following terrific enhanced odds...

What happens if no drivers score points?

If neither driver can finish the race due to a crash or malfunction with the car, Max Verstappen will be awarded the Drivers Championship due to have one more win (9) this season compared to Lewis Hamilton (8).  That means that the non-race in Belgium that Verstappen won completely under safety car is the difference in the championship right now.

One outcome that would be disappointing, but certainly possible, is that both top drivers crash out given the bad blood between the two.

Hamilton and Verstappen made contact twice in Saudi Arabia, and somehow neither car seemed to take significant damage.

So, don't be shocked if the Dutchman "accidentally" knocks the Brit out of the race if he's in a position to lose down the stretch.

However, F1 race director Michael Masi on Thursday warned that any “unsportsmanlike” conduct on the track could result in a points penalty.

Other than Verstappen's 2020 win, Mercedes have won every Abu Dhabi GP since 2014.

Wins in the last five years:

Anyway, the Yas Marina Circuit has been redesigned to have more overtaking opportunities. The track has been shortened, resulting in quicker lap times, potentially by 10 seconds.

There are several changes to several turns, but the most notable is that the chicane in the early part of the lap was removed, and the hairpin turn that followed has been moved forward.

The redesigned circuit does not strongly favor Mercedes or Red Bull, so this could be relatively even.

Hamilton is the all-time record holder at the track with five wins out of Mercedes’ total of seven. Red Bull Racing have won four times since the race’s inception in 2009 and Verstappen is the defending champion at Abu Dhabi. Anyway, while Red Bull excel at circuits on the street with low speed cornering, they can’t master building a more powerful engine than Mercedes has this season. Verstappen knows that his car isn’t as fast as Hamilton and will struggle to keep the Brit's pace. We back Hamilton to win the Abu Dhabi GP and the F1 Drivers Championship. 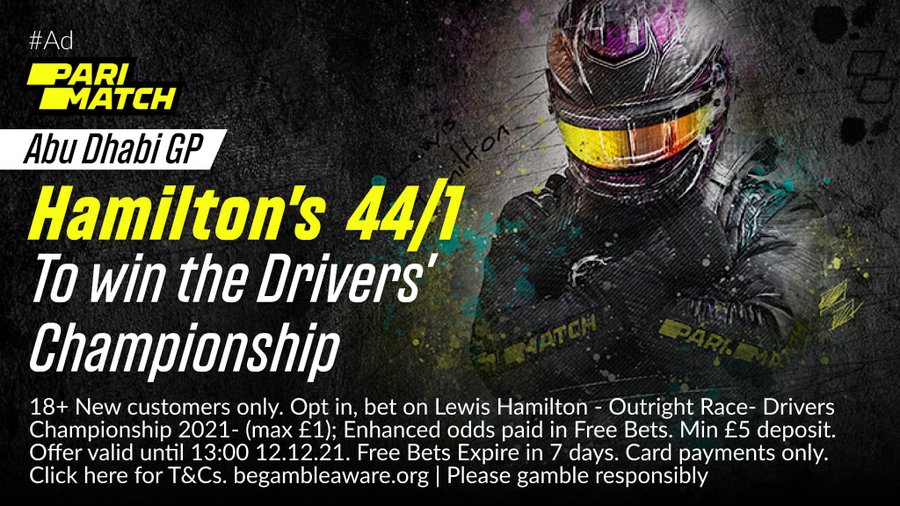