Top bookmakers to bet our Manchester UTD vs Southampton tips

How to watch Manchester UTD vs Southampton?

BT Sport 1 and BT Sport Ultimate will be showing live coverage of from Old Trafford from 8pm.

Fans can stream Man Utd vs Southampton via the BT Sport app. 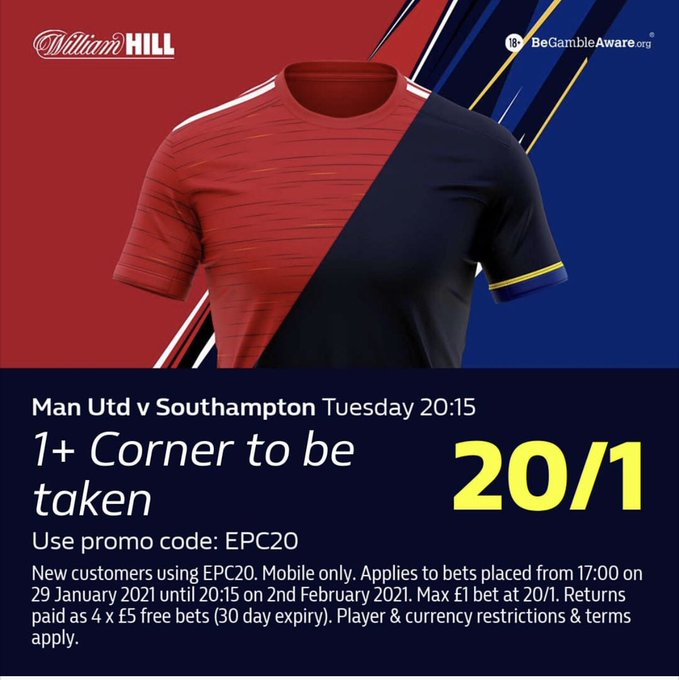 Man UTD's title hopes suffered a double blow in the two most recent fixtures. They were beaten 2-1 at home by Sheffield United and then drew 0-0 at Arsenal. The Red Devils have now scored just once in six games against traditional Big 6 teams so far this season. Furthermore, Ole Gunnar Solskjaer's men only have the 11th best home record in the 2020-21 Premier League campaign, picking up just 14 points from 10 matches.

After an impressive 1-0 win over Liverpool at the beginning of this year, Southampton have have suffered three straight losses in England's top flight to Leicester, Arsenal and Aston Villa. The negative run has seen the Saints slipping out of the top half in the Premier League standings. Ralph Hasenhuttl's side have only won three times away from home in the league this season. Plus, they have suffered a 3-2 loss to United when the two teams locked horns at St Mary's at the end of November.

Phil Jones and Scott McTominay are Ole Gunnar Solskjaer's only injury concerns for the welcome of Southampton. The Norwegian manager is expected to restore Anthony Martial as central striker, with Edinson Cavani making room. Paul Pogba should start again in the offensive midfield trio, with Fred and Nemanja Matic anchoring the midfield.

Jannik Vestergaard is close to a return to fitness, though the trip to Old Trafford may come too soon for him. As a result, Jack Stephens will partner Jan Bednarek as centre-back. Yan Valery will start at right back, as Kyle Walker Peter is still sidelined while Oriol Romeu and Alexandre Jankewitz are in contention for a starting berth in the middle of the park. Moussa Djenepo and Stuart Armstrong are likely to start out wide, since Theo Walcott is not 100% fit. The likes of Mohammed Salisu, Nathan Tella, Michael Obafemi and William Smallbone are still injured.

Our Manchester UTD vs Southampton Predictions

Southampton have gone ten games without beating Man United and we believe the winless streak will be extended to eleven. The Saints have failed to score in the last two away games and just won once in the last 5 outings on the road. Man UTD can't afford to lose more ground from Man City and we back the Red Devils to return to winning ways. Anyway, it should end with a narrow win.

Why not check out some of our best no deposit offers or free bets and combine them with our free picks on Manchester UTD vs Southampton and get your journey started today?!
We also list and rate all the new betting sites. Plus, we are the home of no deposit bonuses and the best place where to learn the best betting strategies and systems!

18+. Play Safe. New customers using EPP25. Mobile only. Applies to bets placed from 09:00 on 15th April 2021 until 23:00 on 17th April 2021. Max £1 bet at 25/1. Returns paid as 5 x £5 free bets (30 day expiry). Player & currency restrictions & terms apply.
New customers only. £10 minimum deposit using promo code "888ODDS" required. Qualifying bet must be placed at the normal odds Min bet £5, max bet £5. Extra winnings paid in FREE BETS and added within 72 hrs of qualifying bet settlement. Free bet stakes not included in bet returns. Free bets expire 7 days after credit. This offer may not be combined with any other offer. Deposit balance is available for withdrawal at any time. General deposit method & withdrawal restrictions apply & Full T&C’s apply
Sign up at TonyBet, make your first deposit and receive 100% of this amount as a welcome gift. Bonus code TONY200. Wagering requirements 10x deposit on betting markets with odds of at least 1.65 within 30 days. A player who made a deposit via NETELLER, SKRILL, Paypal or BITCOIN is not eligible for this offer. 18+. T&Cs apply.
Play Safe. 50% Back of First Day Sportsbook Losses up to £25 Or a Guaranteed £5 Free Bet when you Bet £10. UK Customers | Coupon code 'BET' | £5 Free Bet provided you place at least 1 bet of £10 or greater at minimum odds 2.00 | (18+) T&C apply | begambleaware.org | gamstop.co.uk | Play Responsibly
18+. New customers only. $/€5 no deposit bonus for mobile verified customers only. Minimum deposit $/€10. Maximum bonus $/€50. Wagering requirements on winnings from bonus x15. Full T&Cs apply.

Ballinrobe is available today for betting. Are you looking for the best expert advices for...