Alexander Povetkin and Dillian Whyte will finally lock horns again on 27th March in Gibraltar, with the fight already billed as the ‘Rumble on the Rock’. This article contains our betting preview for Whyte v Povetkin 2, alongside expert predictions  the best odds currently available to back, exclusive promotions and free bets.

Who won the first fight?

Dillian Whyte believed he was on his way to win the bout after dropping the veteran Russian twice in the fourth round. Anyway, Povetkin pulled off a dramatic one-punch victory in the following round. The Russian found a gap in Whyte's defence and brutally exploited it with a stunning uppercut that ended the fight.

The WBC interim world heavyweight title is again on the line, with the winner likely to move on to challenge for the title in the next 18 months. 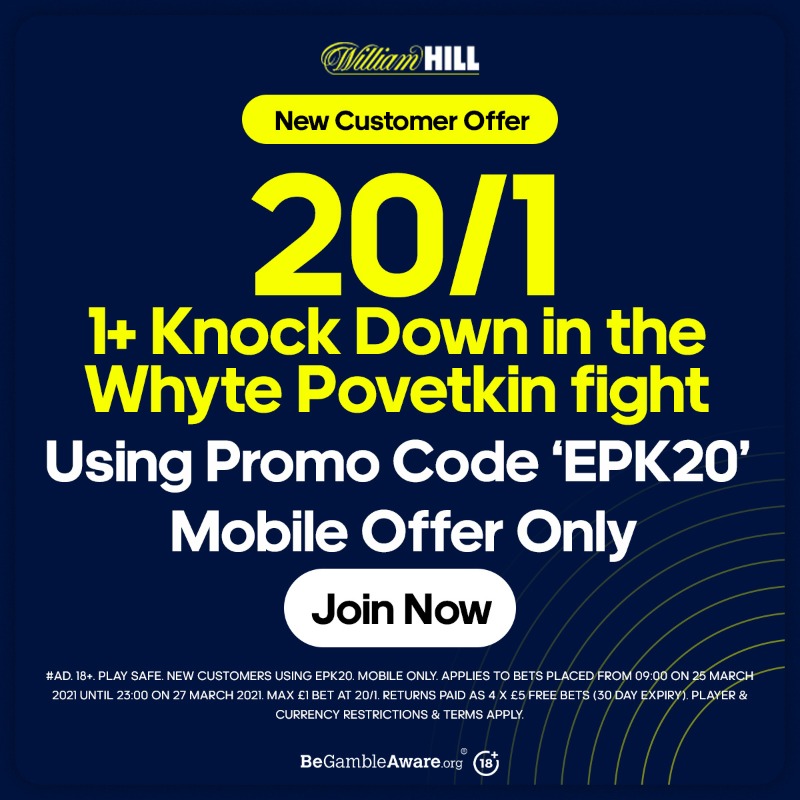 When is the rematch?

The blockbuster heavyweight rematch will be broadcast live in the UK on Sky Sports Box Office on Saturday 27th March 2021. The fight is taking place in the more glamourous setting of Gibraltar in what is being billed as the “Rumble on the Rock”.

The card begins at 7pm GMT, and main event ringwalks are expected at approximately 10pm. However, as always with boxing, the exact start of the main event will depend on how long the undercard runs.

Whyte v Povetkin 2: Who is Favourite To Win?

The Russian was a 3/1 chance to claim victory in the first fight. This time Povetkin is 3/1 to win again with Genting.

Despite losing the first bout, Dillian Whyte is a heavy 3/10 favourite in that contest with Unibet.

The Draw is available at 40/1 with Paddy Power.

Looking for enhanced odds? Take a look below...

Tale Of The Tape

We may see an even more cautious display from the Brixton-raised boxer. We should steer away from another early stoppage but we don't expect this one going the distance. Whyte should come out and look for a positive start and set the tone of the fight using his jab. Povetkin will probably feel ill effects from the virus, so we back Whyte to win (but after the fifth round). 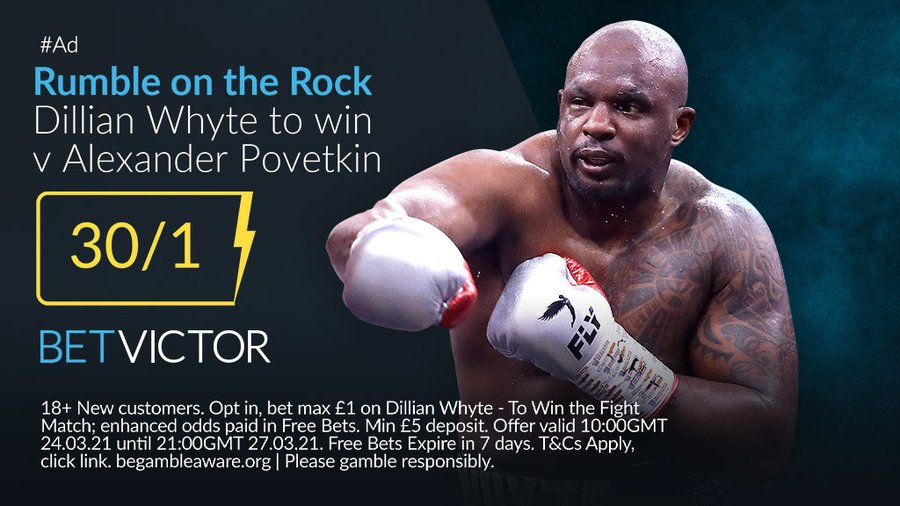 Our professional tipsters regularly bring you boxing tips every! But we don't just provide betting tips on this sport. You’ll find tons of daily predictions thorughout BetAndSkill, from football tips for today to horse racing picks, from NFL tips to BTTS predictions.

18+. Play Safe. New customers using EPP25. Mobile only. Applies to bets placed from 09:00 on 15th April 2021 until 23:00 on 17th April 2021. Max £1 bet at 25/1. Returns paid as 5 x £5 free bets (30 day expiry). Player & currency restrictions & terms apply.
New customers only. £10 minimum deposit using promo code "888ODDS" required. Qualifying bet must be placed at the normal odds Min bet £5, max bet £5. Extra winnings paid in FREE BETS and added within 72 hrs of qualifying bet settlement. Free bet stakes not included in bet returns. Free bets expire 7 days after credit. This offer may not be combined with any other offer. Deposit balance is available for withdrawal at any time. General deposit method & withdrawal restrictions apply & Full T&C’s apply
Sign up at TonyBet, make your first deposit and receive 100% of this amount as a welcome gift. Bonus code TONY200. Wagering requirements 10x deposit on betting markets with odds of at least 1.65 within 30 days. A player who made a deposit via NETELLER, SKRILL, Paypal or BITCOIN is not eligible for this offer. 18+. T&Cs apply.
Play Safe. 50% Back of First Day Sportsbook Losses up to £25 Or a Guaranteed £5 Free Bet when you Bet £10. UK Customers | Coupon code 'BET' | £5 Free Bet provided you place at least 1 bet of £10 or greater at minimum odds 2.00 | (18+) T&C apply | begambleaware.org | gamstop.co.uk | Play Responsibly
18+. New customers only. $/€5 no deposit bonus for mobile verified customers only. Minimum deposit $/€10. Maximum bonus $/€50. Wagering requirements on winnings from bonus x15. Full T&Cs apply.

Ballinrobe is available today for betting. Are you looking for the best expert advices for...