Heavyweight IBF, WBA (Super), IBO and WBO world titles will be on the line as Anthony Joshua and Oleksandr Usyk collide in their eagerly anticipated heavyweight clash on Saturday 25 September at the Tottenham Hotspur Stadium. Who will win the bout? This post contains our Joshua vs Usyk predictions, best bets, betting tips, and the highest odds currently available to back.

Top Bookmakers to bet our Joshua vs Usyk predictions

When Is Joshua vs Usyk & How to watch it?

The official main card gets underway from 6pm local time in the United Kingdom, though there will also be a preliminary fight airing via Facebook from 5pm.

Anthony Joshua and Oleksandr Usyk are expected to make their walks to the ring at around 10:10 p.m. BST, depending on the outcome of the earlier main card fights.

Sky Sports Box Office will be showing the fight in the UK and can be streamed online as well as on television. Outside the UK, DAZN have the rights to the fight in 170+ countries. DAZN is a streaming service that is available on mobile devices, TV streaming devices and many smart TVs, along with web browsers. 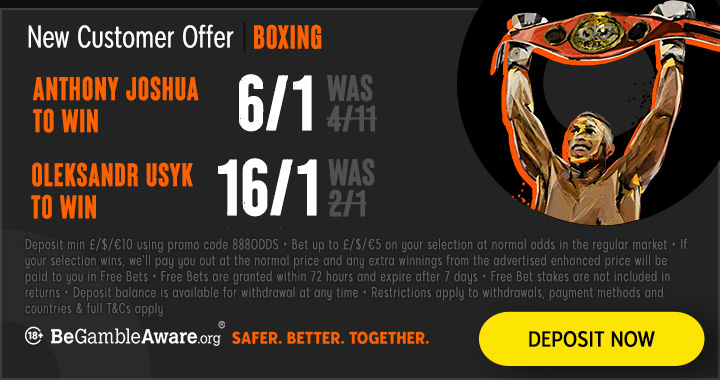 Who is the favourite?

According to the best betting sites, Anhony Joshua is the favorite at 2/5 with Betfred. The former undisputed cruiserweight champion Oleksandr Usyk currently sits as a 12/5 underdog with Bet365, despite being undefeated.

The odds on the judges scoring the contest a draw are a massive 25/1 with Betfred.

Looking for all the Anthony Joshua odds to win this fight and the potential upcoming fights?
We got you covered!

Anthony Joshua (24-1, 22 KOs) has an almost perfect resume. His only defeat as a professional came in 2019, when he was knocked out by Andy Ruiz Jr in stunning fashion at the Madison Square Garden. Joshua avenged that loss in the rematch in late 2019, beating the Mexican by unanimous decision in Saudi Arabia. AJ outperformed Bulgarian Kubrat Pulev last December as he scored a devastating 9th round knock-out. Then, the British boxer has been mandated to face Ukrainian former undisputed cruiserweight champion Oleksandr Usyk. The highlight of Joshua’s career came in April 2017, when in front of a British-record of 90,000 people at Wembley Stadium in London, he recorded an epic 11th-round knockout of Wladimir Klitschko.

The challenger Oleksandr Usyk (18-0), was a dominant force at amateur level is and, like Joshua, is a London 2012 gold medalist. He is unbeaten in his 18 professional bouts to date and was last seen in action last October when he saw off Derek Chisora by unanimous decision. He dominated the cruiserweight division winning the Muhammad Ali Trophy and becoming the undisputed champion in 2018. At cruiserweight, Usyk recorded memorable wins over Mairis Briedis and Tony Bellew. He made the jump to heavyweight last year. In this division, the Ukrainian has recorded victories over Chazz Witherspoon and Derek Chisora.

Joshua will hold a significant height, reach and power advantage over Usyk. But 'The Cat' will undoubtedly present an entirely new obstacle for 'AJ' with his technical prowess and disarming but destructive approach. Tony Bellew, who lost to Usyk in 2018, has insisted that Joshua will never face a better boxer in his career than his next opponent. The Ukrainian is also a deceptively strong puncher, though he hasn’t shown enough pop in his last two fights to suggest it can be a factor against Joshua.

Whoever wins on Saturday will hopes and perhaps even expect to face the winner of Tyson Fury vs. Deontay Wilder for the chance to become undisputed heavyweight champion.

In our opinion, there is simply no room for error with Usyk here, whereas Joshua can take his time and pick his spots to land his big punches. The Ukrainian struggled to absorb Chisora's power punches in the early rounds and AJ is powerful at least as "War".

We expect Joshua to be extremely careful in the first 3-4 rounds, since his chin has been already violated several times (by Klitschko, Ruiz Jr and also Dillian Whyte).

The Brit will probably use his precise jab to keep his opponent at the bay and hammer him at the same time. Both boxer will have their moments in what is going to be a tremendous fight, but we back AJ to win the bout. The 10th round could be the right one to inflict Usyk his first career defeat.