The best 72 darters will grace the Alexandra Palace stage over the next 2 weeks but only one will emerge victorious on January 3rd, winning the Sid Waddell trophy and a record high prize of £300,000. Find here our betting preview on the PDC World Darts Championship, including predictions, tips, best odds, no deposit free bets and exclusive promotions.

PDC WORLD DARTS CHAMPIONSHIP 2016 BETTING PREVIEW  The main draw and the first round runs over December 17 through 23rd and it is a straight shoot out in the best of five sets. The second and third rounds of the competition (December 26-29) go over the best of seven set, the Quarter Finals (January 1st) the best of nine and then the Semi Finals on January 2nd goes over the best of eleven. The final of the PDC Darts World Championship 2015/2016 is due to be played on January 3rd and is over the bets of 13 sets.

Having remarkably won the last four TV Majors (Players Championship Finals, World Series of Darts, Grand Slam of Darts, European Championship), Michael Van Gerwen is currently the 11/10 favourite for this year’s World Darts Championships. His staggering record of reaching every televised final in 2015 speaks for itself. He will be hoping to get his hands on his second World Championship after winning it in 2014 against Peter Wright.

Phil Taylor was the dominant name in the period between 1995 and 2006 where he won 11 of the 12 renewals. He took on Van Gerwen in the final of the Grand Slam just over a month ago and lost 16-13 in an entertaining match. The Power failed to reach the Premier League play-offs for the first time, lost in round one of the World Grand Prix and Players Championship Finals. He's scoring well consistently but has continuously missed crucial doubles this year. Taylor has not picked up major silverware in front of the television cameras since the Grand Slam in November 2014.

Gary Anderson proved he was the best player by beating this year’s red hot favourite Michael Van Gerwen in the semi-final and then 16 times champion of the world Phil Taylor in the final. The number two seed and reigning champ may have to work his way through Vincent van der Voort, James Wade & Phil Taylor on his path to the final. He is in a run of questionable form after early exits in his last three majors

James Wade is in quarter three and is therefore seeded to face Gary Anderson in the quarter-finals. His battles with mental illness have been well documented but after getting married this year he is in a very good place and his darts have improved hugely. Anyway, a 10-3 defeat by Benito Van de Pas is certainly not the kind of form you want be in heading in to the World Championships.

Adrian Lewis is a two time World Champion. At the peak of his form Lewis would have a decent chance this year but he has a rough draw this year too. Peter Wright, Dave Chisnall, Kim Huybrechts and Mensur Suljovic all in his quarter. The world number five heads to Ally Pally in a spell of fine form, having reached the Semi-Finals of the European Championship and World Series, before finishing runner-up in the Players Championship Finals three weeks ago.

Peter Wright is much improved, but he’s in a quarter alongside Lewis, Chisnall and Huybrechts. He has shown he’s got the sheer ability to win throughout the year, and all that remains to be seen is whether close defeats to MVG in recent finals will prove to be a mental block or the final pieces of the jigsaw. Hiss odds are very high because he should face Van Gerwen in the semi-final.

Dave Chisnall enters the tournament on the back of his best season to date with the PDC, having reached the Premier League play-offs and hit a nine-darter in November's Grand Slam. Capable of anything on his day, Chizzy is an outsider always worth a punt.

Raymond van Barneveld,Kim Huybrechts and Robert Thornton are players who are dangerous to dismiss because of their unreal talent, their very best can beat anybody around, so in that respect the big odds have some merit for consideration.

Dark horses that can reach latter stages? Stephen Bunting faces a potentially tricky last-16 tie against Van Gerwen (as well as Raymond Van Barneveld) while Jelle Klaasen shares the same section of the draw as Taylor but he has the potental to cause a major upset.

Mensur Suljovic has been perhaps the most improved player on the PDC circuit this season boasting an unorthodox, yet effective style and unflappable demeanour on the oche. 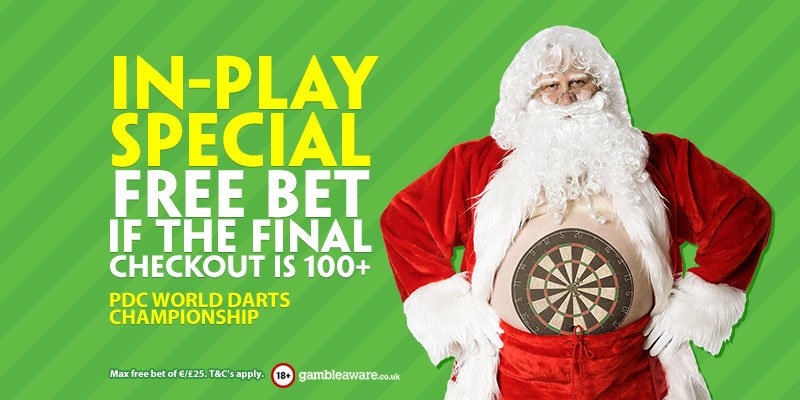 Free bet every time your player wins a match!

Money back if beaten by a bullseye checkout