An injury plagued Manchester United face Midtjylland in the last 32 of the Europa League in Denmark on Thursday. This article contains our unmissable betting preview on MIDTJYLLAND v MANCHESTER UTD with the best betting tips, predictions, team news, lineups, odds, exclusive bonuses & no deposit bonuses on the Europa League!

Midtjylland have no form to speak of because the Danish league is still on its winter break. The current Danish Superliga champions sit only four points back from leaders København in the Superliga, having won nine and drawn four of 17 domestic matches this term. In their last competitive match on 10 December, the Wolves secured passage to the Europa League knockout stages with a 1-1 home draw against Club Brugge.

Midtjylland lost their captain Erik Sviatchenko to Celtic in the January transfer window, which is a big blow at the heart of their defence.  Jakob Poulsen is suspended and fellow midfielder Petter Andersson is doubtful, while goalkeeper Johan Dahlin is definitely out. Martin Pusic will lead the line in a 4-1-4-1 formation fielded by coach Jess Thorup.

Manchester UTD enter the match on the back of a 2-1 defeat at Sunderland on Saturday, a result that looks to have ended their hopes of finishing in the top four in the Premier League. They are now six points behind fourth-placed Manchester City in the standings table with 12 matches remaining.  The Red Devils find themselves in Europa League because they finished third in their respective Champions League group behind Wolfsburg and PSV Eindhoven.

The Red Devils are again ravaged by injuries. Wayne Rooney is injured and could be out for 2 months with a knee injury. This could provide an opportunity for Will Keane to start. Matteo Darmian faces another spell out of action after dislocating his shoulder at the weekend, but Marcos Rojo and Antonio Valencia are nearing a return. Cameron Borthwick-Jackson is also ill and has not travelled. Bastian Schweinsteiger and Luke Shaw remain sidelined. 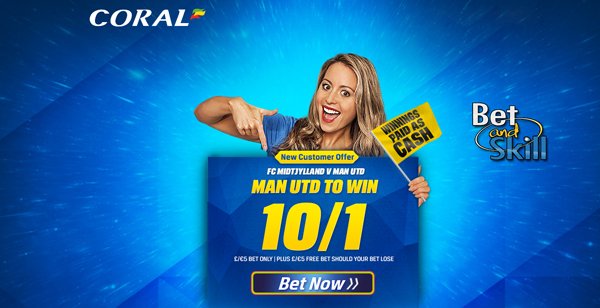 Are you looking for the best expert tips for today's horse racing meeting in Redcar?...