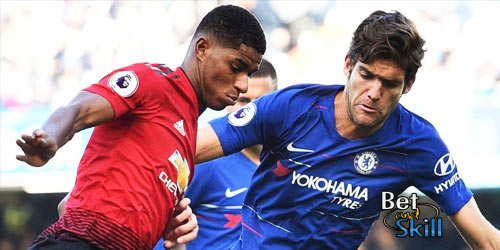 Manchester UTD and Chelsea face a must-win clash in their hunt for a place in the Premier League’s top four when they lock horns Old Trafford on Sunday afternoon. Who will win? This article contains our Manchester UTD vs Chelsea betting preview with betting tips, predictions, probable line-ups, team news, enhanced odds, bookie offers and no deposit free bets!
We are giving away 5 Champions League ball this month! Join our Shoot & Score competition here!

Manchester United have won only two of their last nine matches

Man UTD now sit three points adrift of their fourth-placed guests with just three matches left to play. They have shipped six goals. But more worryingly they’ve failed to find the net in either in their last two games in back to back defeats agains Everton (4-0) and Manchester City (2-0). As to direct encounters, the Red Devils won the most recent meeting back in February, beating the Blues 2-0 at Stamford Bridge in the fifth round of the FA Cup while the first league meeting finished 2-2 at Stamford Bridge in October .

Solskjaer he could field Fred or Scott McTominay to partner Paul Pogba and Nemanja Matic in United’s engine room. As a result, Andreas Pereira and Fred should make room in the middle of the park. The back four may stay unchanged, with forgotten man Matteo Darmian in the fold. Romelu Lukaku, Anthony Martial and Alexis Sanchez were substitutes in midweek and will hope to start but only the Blegian is expected to feature from the off, as Jesse Lingard and Marcus Rashford are likely to retain their berth. There was no update in Solksjaer's presser on Phil Jones, Eric Bailly or Antonio Valencia and they are all expected to miss once again.

Chelsea could only manage a 2-2 draw at home to Burnley on Monday and lost to Liverpool the weekend before. The Blues now sit fourth in the Premier League standings, three points shy of Tottenham (who lost against West Ham on Saturday), one point above Arsenal and three pooint above Man UTD. Chelsea have lost five of their last seven away league matches and have failed to score in each of those defeats. Plus, Maurizio Sarri's men have kept only one clean sheet in 12 on the road and conceded 18 times in just the last seven. The Blues are also winless in their last five away matches at Old Trafford.

The Blues lost Callum Hudson-Odoi to an Achilles injury earlier this week, and the youngster is set to miss the rest of 2019. Antonio Rudiger could return at the expense of Andreas Christensen at centre-back, while there was no update on Marcos Alonso (gluteal injury). Furthermore, Sarri said he was "not sure" whether N'Golo Kante would be able to recover, meaning that Mateo Kovacic and Ross Barkley are in contention to start in midfield alongside N'Golo Kantè and Ruben Loftus-Cheek. Up front, Gonzalo Higuain should feature from the off as central striker, but Sarri could also decideto play Eden Hazard as a "false nine". Olivier Giroud looks set to be among the substitutes again and will perhaps instead return to the Chelsea side in Europa League on Thursday. 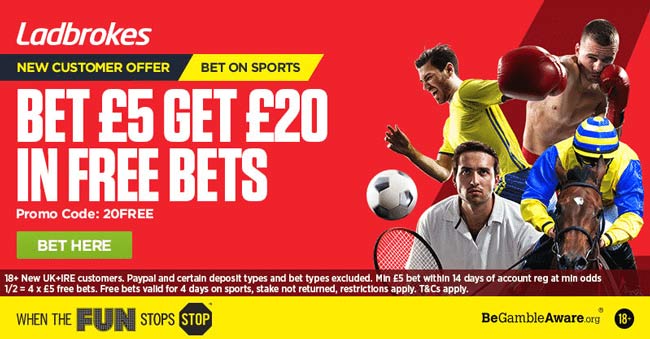 We scour the web for all the highest odds, so you can find here the best prices around and maximise your return. Find below the best odds on the Manchester UTD vs Chelsea winner market. Wanna get price boosts on this week's matches and maximise your profits? Take a look at our enhanced odds offers!

This section contains our best betting tips on Man UTD vs Chelsea. We give you the best chance of bashing the bookmakers with single bets or combining all the recommended tips in a single betslip (through Bet365 Bet Builder for instance). We invite you to use our suggested Bet Builder tools and start building your bets. If you’re new to online betting a good place to start is our Betting Guide hub, a collection of the best tutorials and betting strategies.

Our mission at BetAndSkill.com is to provide you with free researched Premier League football tips. You can back our predictions on the go with the brand new BetBull social betting app. And if you want to start betting with no risks attached, no problem.. we have a lot of free bets no deposit waiting for you!
Plus, daily football predictions and BTTS Tips since 2007!

Redbet offer 25/1 Manchester UTD to beat Chelsea! Winnings paid in cash!
Claim Here
Promo code BOOSTEPL3. Sign up, deposit a minimum of £10, place the maximum £1 bet on Man UTD to beat Man City and if successful, you win £35 CASH. Regular Sport Welcome Offer can not be claimed in conjunction with this exclusive boosted odds offer. 18+ begambleaware.org

A struggling Manchester United continue their tough run of fixtures on Thursday night against an...