Manchester UTD and Leicester lock horns on this year's Premier League opening match and bookmaker Coral is offering a massive 28/1 for A Goal To Be Scored (over 0.5 goals). This is your best chance to start the new football season with a BANG! Stake £1, get a £28.00 return as soon as a team finds the back of the net! Plus, receive £5 free bet if the match ends in a goalless draw!

Manchester UTD endured a rotten pre-season and the situation is becoming increasingly tense at the Old Trafford. Leicester recorded a series of mixed results over the summer but will aim to upset a struggling United.

Are you placing a bet on this match? You can earn £28 if the match doesn't end in a 0-0 draw! Find below how to claim your 28/1 price boost for A goal to be scored in Manchester UTD v Leicester!

Manchester UTD vs Leicester: Get paid 28/1 if ANY goal is scored

1 JOIN
Register a new account with Coral before the start of the match (Friday 10th August, 8.00 pm, UK Time) and claim 28/1 ANY goal to be scored during Manchester UTD v Leicester! You won't find a better promotion today!


3 IF YOUR BET WINS
Should you win, your additional winnings will be paid as free bets.

4 IF YOUR BET LOSES
Should you lose, you will receive a £5 free bet!

Coral are upping the ante on Manchester UTD v Leicester offering a HUGE 28/1 for A Goal To Be Scored! Click here to head to the promotional page and get your boost in few simple steps 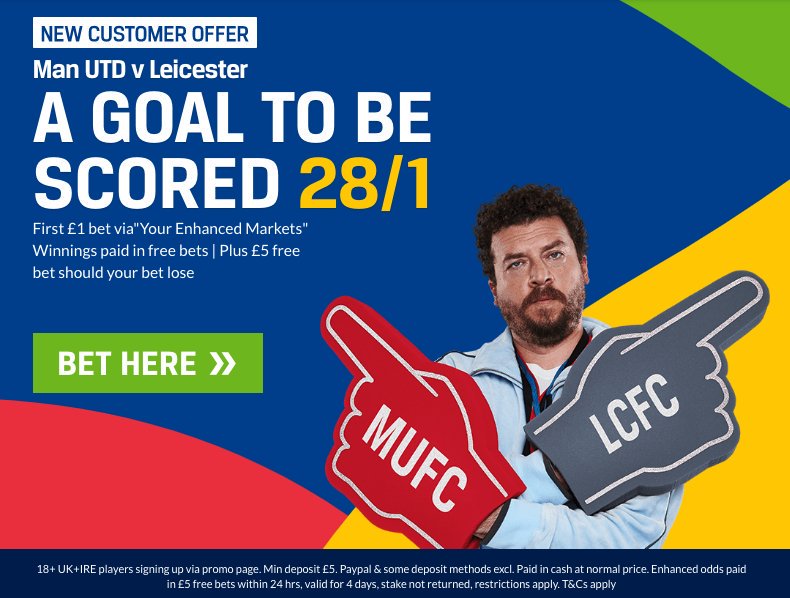 Cash stake paid out on normal odds and additional enhancement paid in free bet tokens of £/€5 or less.

Great action in today's Cheltenham! Get all the best expert opinions on today's horse racing...