Manchester UTD secured a morale-boosting victory before the International break after Marcus Rashford’s 16th-minute goal sealed a 1-0 success over Man City in the Manchester Derby at the Etihad Stadium. Prior to that match, the Red Devils were knocked out of the Europa League after two disappointing results against Liverpool, drew 1-1 at home to West Ham in the Emirates FA Cup and lost 1-0 at West Brom in the league. The derby victory over Man City kept Van Gaal's side in sixth, but they are now just one point off the top four.

Marcus Rashford is expected to continue in the final third as Louis van Gaal could name the same starting XI of the derby. Anthony Martial, Jesse Lingard and Juan Mata look set to form the attacking midfield trio once more. Ander Herrera and Ashley Young could return to the squad after recovering from groin problems, while Phil Jones remains out. Marcos Rojo may continue alongside Daley Blind, Chris Smalling and Matteo Darmian in defence. Bastian Schweinsteiger is out with a knee injury. 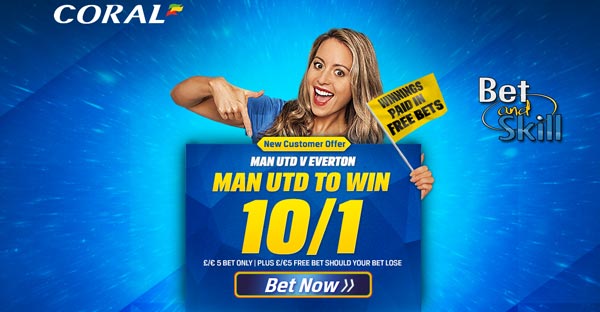 Everton languish in 13th place in the league and are closer to the relegation zone than they are to the top four after a 2:0 home defeat to Arsenal last time out. Scoring goals has not been a problem having hit 51 in the league this term, but a shaky defence has conceded 41 times. Anyway, the Toffees boast a very solid away record this term as they have lost only one game on the road this season, against Arsenal back in October

Roberto Martinez will still be without the suspended Gareth Barry, although Kevin Mirallas is available after serving a two-match ban. John Stones and Bryan Oviedo are both fit and they could oust Phil Jagielka and Leighton Baines in defence. omelu Lukaku will be expected to lead the line for the Toffees as usual with Cleverly, Barkley and Lennon behind the Belgian striker.


The reverse fixture was one of United’s best performances all season, with the Reds winning 3-0 at Goodison Park in October and also recorded a 2-1 victory in the corresponding league game last season. Everton have won four of the last seven Premier League meetings between the two teams, but have only won once at Old Trafford in their last 22 attempts.