YouTube stars KSI and Logan Paul battle it out in the boxing ring at Manchester Arena, in what has been billed as "the biggest event in internet history". Who will win the fight? This article contains our KSI vs Logan Paul betting preview with free predictions, betting tips, best odds, bookie promotions and no deposit free bets on this fight!

KSI, real name Olajide "JJ" William Olatunji, is the brash 25-year-old British gamer, comedy vlogger and rapper whose videos have racked up 4.4 billion views. Since 2015, he has released ten singles with the most successful, Lamborghini featuring P Money, reaching Number 30 in the UK charts. KSI enjoys a YouTube fanbase of more than 18m. He made enough money from YouTube to drop out of school and now has estimated annual earnings of £2.3 million.

KSI will put his 'YouTube Boxing Championship' on the line as he gained his title in his first career bout against Joe Weller - another Youtuber - back in February at the Copper Box Arena in London. That fight endedin the third round by way of technical knockout. KSI showed a good jab in that fight as well as decent enough footwork to keep the plodding Weller at the end of his punches. He bloodied the face of his opponent in the opening round and never looked back in the one-sided drubbing of Weller.

Logan Paul is the 23-year-old US prankster and former state wrestler. He made his name on Vine before moving to YouTube, where he's had 3.9 billion views. His two channels are thought to have earnt him an annual $1 million (£762,600) and $14 million (£10.7 million) respectively. He was in the center of attention when he uploaded a video on New Year’s Eve 2017 of a man hanging in “suicide forest” at the base of Mount Fuji.

While Logan Paul can’t boast of having any experience of fighting in a celebrity boxing match, the YouTuber has been training at the Mayweather Gym in Las Vegas in preparation for the fight. Little footage of him in a boxing ring exists. What was leaked was a very short video of him landing a solid left hook to a sparring opponent. The American wrestled as a youth, so that experience should lend itself well to this other form of combat. The bookmakers opened with Paul as 6/4 underdog. He is now the 8/11 favourite and is receiving plenty of support from punters. Logan has bet $1 million on himself to win.

Are you looking for the highest odds available on the fight winner market? This sections contains the highest prices on the KSI vs Logan Paul bout! We recommend to claim best odds by clicking the yellow 'Bet' button. Wanna get exclusive price boost offers? Take a look at our Enhanced Bets page.

Our boxing tipsters have deeply analysed all the relevant betting factors about this bout. KSI is definitely the smaller of the two men, Logan Paul was a State-Level wrestler in high-school but there is a very small weight difference. This is obviously an incredible difficult event to analysed, as they aren’t real fighters. We expect KSI to come out as the aggressor and should be able to take the first couple of rounds, but the cardio and pure size advantage that Logan Paul should be the decisive factor in the final rounds.


You can back them as single bet or combine all of many of our betting tips by requesting your odds. Don't you know how to do it? Read our Paddy Power Same Game Multi's tutorial!

At BetAndSkill you can find much more than Sports betting tips! We are the home of no deposit bonuses, free bet promo codes and the best place where to learn the best betting strategies and systems! 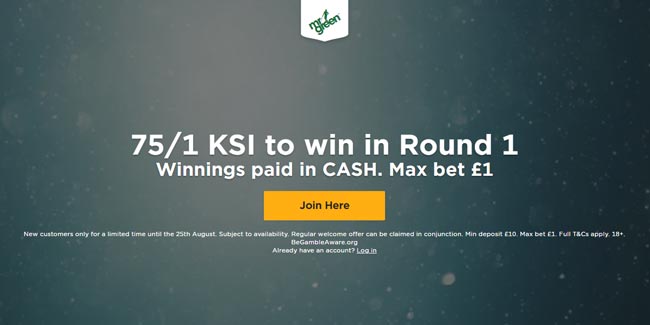