The Grand National never fails to cause a few shocks, and we’re not just talking about the outrageous dresses welcomed on Ladies Day. No, on the racecourse, in one of the most prestigious races in Britain, the Grand National loves an underdog, and so do us punters.

As many of us start our Grand National 2022 betting, we’re all wondering which horse has the best value as they battle it out for the £1 million prize pot.

It’s been 12 years since a favourite won in the race, but which runners have caused the biggest shocks throughout the Grand National’s long and prestigious history?

Top Boookmakers To Bet On The Grand National

Auroras Encore bagged a number of punters a cool profit back in 2013 as Ryan Mania rode the horse to victory.

It was a comfortable run for the Sue Smith trained horse and will easily go down as one of the best wins of the last decade.

He was a huge outsider having finished no higher than fourth in the early stages of the 2012/13 season, so was given little hope, particularly as Mania was also running his first ever National.

A win by nine lengths though put both their names on the map, although Auroras Encore would shortly after have to retire after breaking his foreleg in January of the following year.

A 100/1 win is the stuff of dreams for punters. Every year we bet on the Grand National outsiders, just in case and betting on this year’s major horse racing event will be no different.

Mon Mome made for some very lucky punters back in 2009 and is one of just three horses to ever win the race at 100/1.

Ridden by Liam Treadwell, he was also the first French horse to win the race for 100 years making it one of the most remarkable races in Grand National history.

Trained by Venetia Williams, the horse provided a real shock beating the reigning champion Comply Or Die by 12 lengths.

The last horse to win at 100/1 before Mon Mome was Foinavon back in 1967 in what was a huge shock at Aintree.

The Irish horse was dealt a great deal of luck in the most bizarre of circumstances. Such was the unfavoured nature of Foinavon, owner Cyril Watkins didn’t even turn up to watch the race. And until the 23rd fence he’d have been quite right not to bother.

He showed no chance of winning the race until Popham Down, who had been without a rider since the first fence, jumped into Rutherfords at the 23rd causing a huge melee in which unseated jockeys, floored horses and prevented other horses from jumping. Except one.

Foinavon had been so far behind that jockey John Buckingham was able to steer his horse into safety, over the fence and found himself 30 lengths clear on the Canal Turn. That was eventually narrowed to 20, but crowned the most unlikely winner and created Grand National folklore.

Just two years precious, Duchess of Westminster, Anne Grosvenor won the National with the horse she owned, Last Suspect. A 50/1 shot, the horse was ridden by Hywel Davies and was largely looking like he was racing for a place throughout as Corbiere, one of the favourites remained in control.

However, at the second to last fence, Mr Snugfit overtook and went clear of the pack. The final fence laid heavy on him and with an extra stone of weight, Last Suspect and Corbiere closed him down and Last Suspect rode strongly in the final 100 yards to claim the win. 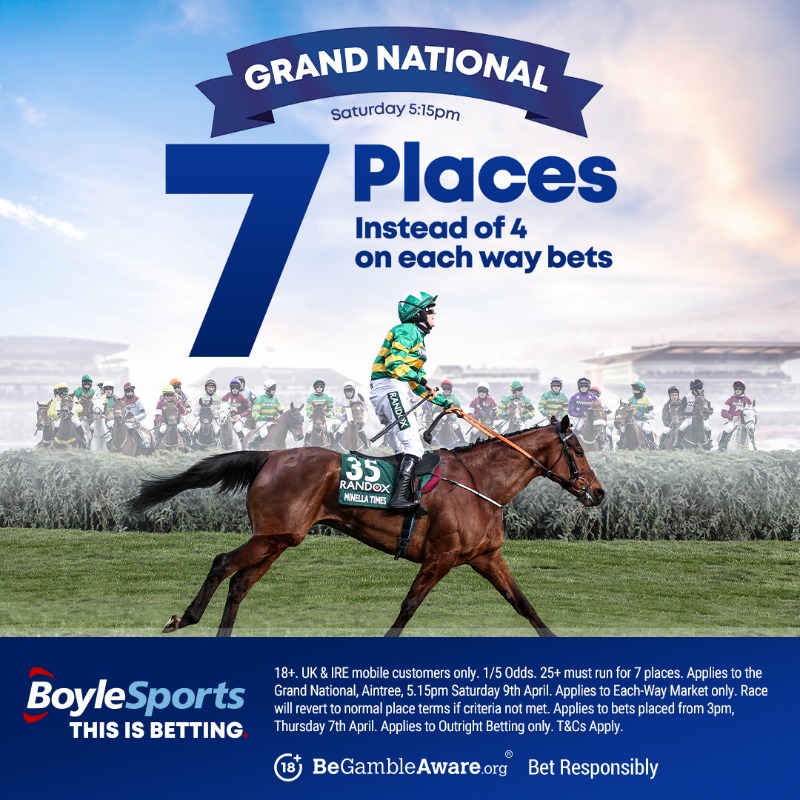 History suggests that an upset could well be in the making in the 2022 Grand National. Last year's Grand National went to Minella Times at odds of 11/1 and he’s priced around 20/1 for this year's renewal. Any Second Now is the odds-on favourite at 9/1 with William Hill at time of writing.

However, Cloth Cap at 25/1 and Eclair Surf at 33/1 are looking like excellent value ahead of the race.

Boylesports are currently offering these prices and could be worth backing before the odds start to shorten. Wanna a free bet on the Grand National? We got you covered!

Looking for Grand National Tips 2022? Our horse racing experts have shared their recommended bets! Don't miss the chance to copy our researched picks!

Of course here at Bet & Skill we’ll continue to provide you with all the best Grand National tips for both the favourites and outsiders as April 9, 2021.