Friday 11th June will see the start of Euro 2020 and here you can find here our full preview and betting tips on the Outright Winner market. Who will win the European Championships? This post contains our experts' Outright tips, predictions (To Lift The Trophy, Finalists, Semi-Finalists and many more), enhanced odds, promotions and the betting offers to enjoy the Euros!

Before providing our betting tips on which team is going to shine this summer and which team will struggle, we analyze the tournament's favourites and provide the best odds on each team to lift the trophy..

France are the reigning World Champions having won the Russia 2018 tournament in impressive fashion. Many of that team are still part of a French group who qualified comfortably enough for these finals despite dropping four points against group runners-up Turkey. They have a perfect chance to avenge a Euro 2016 final loss to Portugal, since Cristiano Ronaldo & co. have been drawn in the same pool. 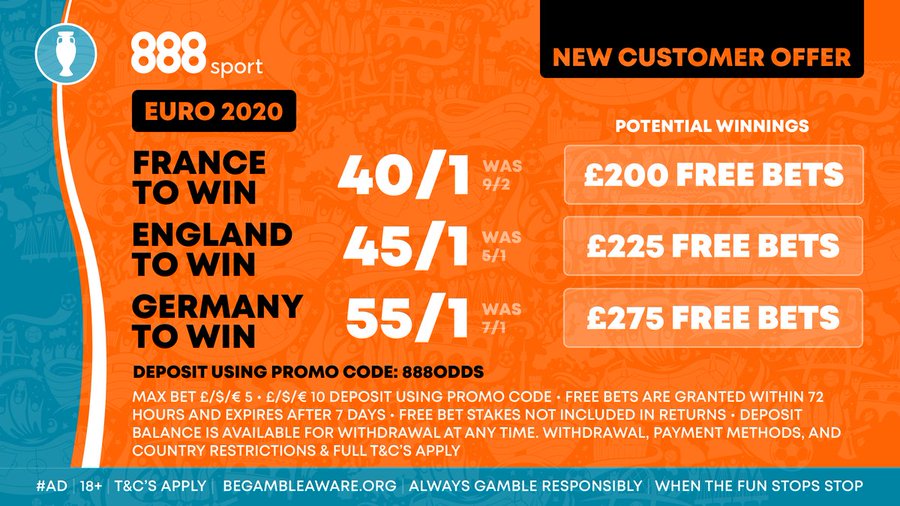 England are one of the ante-post favourites to lift the cup this summer. They are around 7/1 with most online bookmakers (888sport have boosted the Three Lions to 45/1) to win the tournament. The Three Lions powered through qualifying for this tournament, being successful in seven of eight matches. Their only loss in qualifiers did come against Czech Republic in Prague. Furthermore, Gareth Southgate's men scored a whopping 37 goals in their eight qualifying matches -  their nearest rivals in the group only scored 13! The Three Lions have not been at their best in their two warm-up games ahead of their Euro 2020 opener but they managed to beat both Austria and Romania and keep a clean sheet.

Belgium came away from the 2018 World Cup with a bronze medal and are joint favorite to win Euro 2020 (alongside England). Many expect Belgium’s ‘golden generation’ to break the country’s duck on the big stage this summer or at the 2022 World Cup in Qatar. This is a squad that is now packed full of tournament experience and players in their prime. Since finishing third at the World Cup, Belgium have won 21 of their 25 games in all competition, with just two defeats. They recorded a perfect qualifiying campaign - 10 wins out of 10 games with 40 goals scored - beating 4:1 and 3:1 Russia in the process.

Spain comfortably won their qualifying group, amassing 26 points from ten games and scoring 31 goals. La Roja has bowed out of the last two major tournaments  at the last-16 stage, most recently losing on penalties to Russia at the 2018 World Cup. They have only lost once in their last 19 outings - a 1-0 defeat at the hands of Ukraine - but their UNL campaign was below par. There are signs Luis Enrique’s hard work is paying off following some impressive displays over the last two years (a 6-0 success over Germany above all), despite the lack of a world-class forward.

Germany crashed out in the opening round of Russia 2018 - they entered the tournament as World Champions having in 2014 - finishing bottom of a mediocre group containing Sweden, Mexico and South Korea. Since then, Die Mannschaft has been in a state of transition mixing good performance to disappointing outings. Joachim Low's men failed to win any of their four games against France and Netherlands in the opening edition of the Nations League (finishing with a W2 D3 1L record in last year's competition) and recently suffered a 6-0 defeat at the hands of Spain. Defense is their main concern. 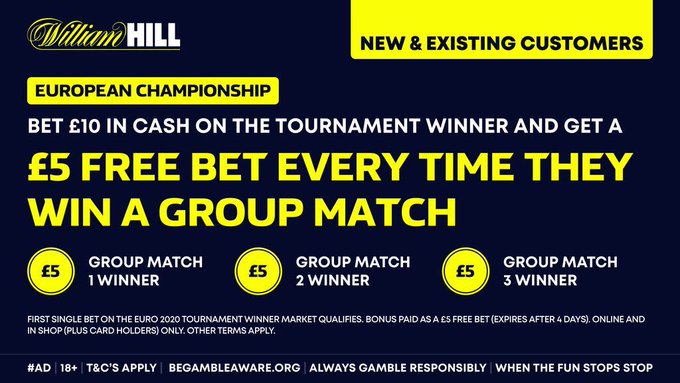 Portugal will head into this summer’s as defending champions as they won the 2016 edition - beating host nation France in the final. The Seleçao also won the inaugural edition of the UEFA Nations League back in 2019 and have added the likes of Bruno Fernandes, Diogo Jota, Joao Felix and Ruben Dias to their squad. Fernando Santos’ men are in good form, losing just two of their 26 matches since the 2018 World Cup. An opening match against group outsiders Hungary could prove an advantage for Cristiano Ronaldo & co.

Netherlands failed to qualify for Euro 2016 before also going on to miss out on a spot at the 2018 World Cup in Russia. Since Ronald Koeman as been appointed as manager, the Dutch team has been impressive. They finished second behind Germany in their Euro 2020 qualifying group, winning 6 of their 8 fixtures and beating Germany 4-2 in the process. Anyway, Koeman has since departed (he is now at Barcelona) and new manager Frank De Boer has struggled to maintain those levels. They have won just two of their 6 matches with De Boer at the helm. The Oranje will play all their three Euro 2020 group matches at the Johan Cruyff Arena in Amsterdam and this will be a huge advantage over their opponents.

Roberto Mancini has rebuilt Italy after the ultimate failure, as the Azzurri failed to qualify for Russia 2018 under Gianpiero Ventura. Across 32 matches of Mancini's tenure, they have won 21 and lost only two (against Portugal and France). Italy won all 10 of their qualifying matches conceding just 4 goals, and are unbeaten in 27 matches, with their last defeat dated back in September 2018. In the last two Euro 2020 warm-up matches, the Azzurri hammered San Marino (7-0) and Czech Republic (4-0). Before the pair of recent friendly victories, Italy had won their previous five encounters 2-0, beating the likes of Poland and Bosnia-Herzegovina.

Is it coming home? Honestly, we believe England has the best chance to win a major tournament of the last three decades but we fear the Three Lions will fall at one of the last two hurdles. Actually, if they win the Group D, they will face the second placed of the Group F (probably Germany, France or Portugal). Hence, the last-16 round could be a tough one for Southgate's men (unless they make their best to finish 2nd in the group stage in order to get an easier route to the final).

We are backing Belgium to win Euro 2020 this year - the Golden Generation is ready to win silverware. Belgium vs France is our favourite selection in the "name the Finalists" market. In our opinion, Italy could be the dark horse of the tournament and we expect the Azzurri to make at least a semifinal.

Strugglers? We believe Germany and Netherlands will struggle this summer.

Euro 2020 is the highlight sporting event of this summer and there is no shortage of betting sites offering free bets on the tournament.

Looking for all our Euro 2020 predictions and betting tips? Click here!

For any additional questions you might have regarding the Eurous tournament, betting markets, and odds, you can take a look at our frequently asked questions below.

What is outright betting?

When is the best moment to bet on the Euro outright? How to bet?

With Euro 2021 outright betting, you are betting on the final outcome of a tournament. Naturally, Euro 2020 final odds are the highest when there is the least information available. Like we have said, as the tournament advances, the odds will drop.

As a signature tournament for the most popular sport in the world, almost every online sportsbook and betting site will offer odds for the European Championship. Check out the best football betting sites available where you live.

Which teams are the favourites to win Euros?

According to current Euro 2021 favourites odds, provided by the major bookmakers, the top five Euro 2020 outright odds belong to France, England, Spain, Belgium and Germany. You can, of course, expect the odds to change, as more matches are played out.

Which country will host the European Championship 2021?

Who won the lastest editions of the European Championships?

Here is the list of European Championship winners since its founding: