The fourth instance of the Coral £1m Smart Money Series is on the horizon. Players who answer 10 questions right about the Cheltenham Festival can win the share of £100k! Find here how to play the Coral £1 million Cheltenham Jackpot, our tips and answers!

After the success of their three  free-to-play prediction competitions last year – run across the World Cup, the start of this season’s Premier League and the PDC World Darts Championship, Coral are back with yet another one - it falls under the Coral £1million Smart Money Series. The competition gives you the chance to win £100,000. You'll just need to predict a few horse racing results to take home the cash.

Play Coral Smart Money Series! Correctly answer 10 questions on the Cheltenham Festival 2019 for a chance to win a share of £100000!

You can find the best 10 Coral £1 Smart Money Series answers at the bottom of this page! 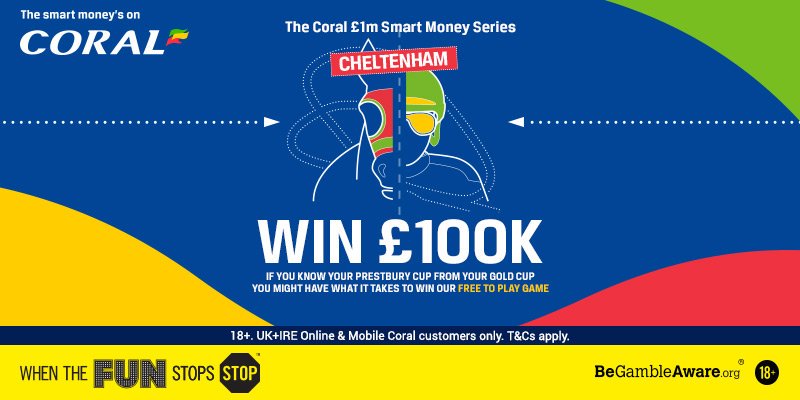 Find below how to play for free..

The odds of predicting all 10 outcomes correctly are quite high. Therefore we share relevant stats and our suggested answers to win the Coral £1m Cheltenham Jackpot! Our selected answers are highlighted in green.

2017 saw Ireland capture 19 of the 28 races and last year the luck of the Irish carried through again with the final score in the Prestbury Cup, 17 winners for Ireland to 11 winners for team GB. This year Ireland look to have a strong hand and the Prestbury cup could be kept on Irish soil for another year.

2. Who will be the Top Trainer at the Cheltenham Festival?

Gordon Elliott emerged onto the scene in 2007 when Silver Birch won the Grand National under Robbie Power. Last year saw Elliott grab the trainers title with 8 winners, 1 ahead of rival Willie Mullins who in turn was well clear of nearest pursuers Nicky Henderson, Paul Nicholls and Colin Tizzard all with 2 wins each to their names. Gordon Elliott also held the crown in 2017 with 6 winners and more second placed finishers than Mullins.

3. Which one of these two top owners will win more prize money at the Cheltenham Festival?

Michael O'Leary’s Gigginstown House Stud captured the champion owners title last year with 7 winners to his name, 6 of those being provided by Gordon Elliott and the other by Henry De Bromhead with Balko Des Flos. JP McManus chased up the fellow Irishman in vain with 2 winners including dual Champion Hurdle winner Buveur D’air and Grand Annual winner Le Prezien.

4. How many favourites (including joint/co favourites) will win at the Cheltenham Festival?

Talk of favorites and Cheltenham will bring nightmares to many after Annie Power fell in the 2015 Mares Hurdle which would have been the 4th winning favourite from the first 5 races and was the last leg of many people’s accumulators. There were 6 winning favourites in 2017 including 3 on Ruby Thursday where Yorkhill, Un De Sceaux and Lets Dance provided Mullins with a treble. Last year there were 8 winning favourites including Champion Chase winner Altior who will look to supply favorite backers with another win again this year.

5. What will be the starting price of the biggest priced winner at the Cheltenham Festival?

6. Will a female jockey win a race at the Cheltenham Festival?

Last year saw 4 female riders gaining a win at the Cheltenham Festival including Lizzie Kelly, Katie Walsh, Bridget Andrews and finally Harriet Tucker on dual festival winner Pacha Du Polder. Paul Nicholls also supplied Bryony Frost with a win under the Pacha Du Polder in the 2017 Foxhunters. She partners Frodon in this year’s Gold Cup to add to her tally

7. Will an Irish-trained horse win the Supreme Novices’ Hurdle on Tuesday?

An Irish trained horse has won 4 of the last 6 renewals of the race with Altior stopping the Mullins/Walsh dominance in 2016 after Champagne Fever, Vautour and Douvan all captured the festival opener for three years in a row.

8. What will be the starting price of the winner of the Coral Cup on Wednesday?

The biggest priced winner of the Coral Cup handicap in the last 10 years was Medinas in 2013 returning an SP of 33/1 for Alan King and Wayne Hutchinson. Jockey Mark Walsh gained a first win at the festival last year after picking up a spare ride on the 20/1 winner Bleu Berry. The average price of the winner in the last ten years has been 16/1.

9. Will a female trainer have a winner at Cheltenham on Thursday 14th March?

The last female trained winner of the festival was Martello Tower in the 2015 Albert Bartlett for Margaret Mullins. There looks to be a strong hand for female trainers on the Thursday of this years Festival with Waiting Patiently looking to bounce back for Ruth Jefferson and Paisley Park the hot favorite in the Stayers hurdle for Emma Lavelle.

10. What will the winning distance be in the Gold Cup on Friday 15th March?

Last years winner Native River outstayed King George winner Might Bite up the Cheltenham hill to a 4 ½ length victory. The average winning distance of the Gold Cup of the last 5 renewals has been just over 3 lengths with the 2014 winner Lord Windermere getting up in a thrilling finish to beat Gods Own by a short head.

So that’s all 10 answers – get your entries in before the Cheltenham Festival kicks off and we wish you all the luck in the world.

If you use some of our suggestions and win the £100k quid, feel free to share some of it!