The Mares Hurdle is one of the newest races at the Cheltenham Festival, run over two and a half miles and, as the name would suggest, for mares only. Roksana won the 2019 Mares' Hurdle - becoming the first horse trained in Britain to win the race since 2008 - after Benie Des Dieux fell at the last. This article contains our Mares Hurdle race preview with free predictions, tips, betting trends, best odds, free bets and no deposit bonuses on the 2020 Cheltenham Festival.

Are you looking for all the 2020 Cheltenham predictions? Visit our Cheltenham betting tips section here!

Join Ladbrokes today! Get a €/£1 no deposit free bet!

The Mares Hurdle was first run at the Cheltenham Festival in 2008. We have seen some great winners over the past few seasons and the race quality is seemingly getting better every year. It's a Grade 1 National Hunt hurdle, run over two miles and four furlongs, for fillies and mares aged four and upwards. Prize money has been boosted to £120,000 this year. The history of this race all revolves around the wonderful mare Quevega, who won the race six times from 2009 to 2014. Willie Mullins’ love affair with the Mares’ Hurdle ended last season when Benie des Dieux fell at the last jump.

And now we'll take a closer look at this year's Mares' Hurdle and try to determine which horse is likely to prevail.

BENIE DES DIEUX has only tasted defeat once since joining Mullins from France over three years ago and it came in the Mares' Hurdle last season, when she was well in command but came down at the last.  She has been at her brilliant best in her two starts over three miles, winning a Grade 1 in France when beating the French superstar hurdler De Bon Coeur, and winning the Galmoy Hurdle last time out.

HONEYSUCKLE is unbeaten in seven runs over hurdles beating some smart opponents and could be the one to catch coming up the hill. She took her form to a new level in the Hatton's Grace, forging clear to win by nine lengths, lowering the colours of Bacardys and a below-par Apple's Jade. Henry De Bromhead's mare has looked very impressive in her two starts this year. In her last outing at Leopardstown she dropped back to two miles and won the Irish Champion Hurdle.

ROKSANA won last year's renewal in favourable circumstances but failed to win since then. She finished a narrow second to If The Cap Fits in the Liverpool Hurdle at Aintree at the end of last season and ran well to finish second behind Summerville Boy in the Relkeel Hurdle on her latest start.

LADY BUTTONS recorded a luckless 4th place last year and enter this race on the back of an impressive victory in a mare chase at Doncaster last month. She is arguably better over the bigger obstacles but we can't ruled her out considering she has been in cracking form over fences and hurdles this year.

STORMY IRELAND, who followed Roksana over the line in the Mares’ Hurdle last year, has thrown her hat into the ring after a trio of successes this term took her form to a new level. She beat the boys in the Limestone Lad Hurdle and was also second to Laurina at Punchestown last month. 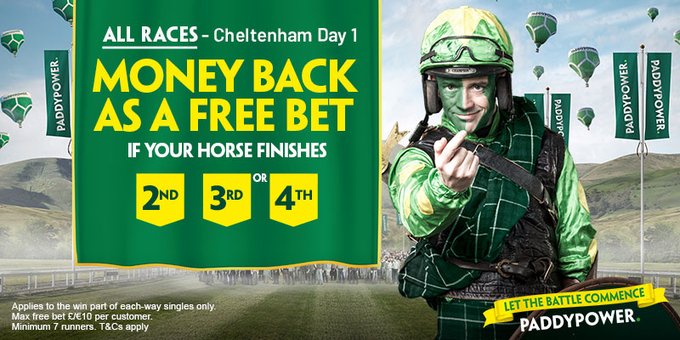 ELFILE won her first two starts of the new season, including a Listed triumph at Punchestown and was last seen finished second to bunkmate Stormy Ireland over Christmas.

CAP SOLEIL did well in 2017/18 (second in Dawn Run at Festival) but has been very lightly raced since. She has recorded her last win over two years ago. On her last outing, she finished well beaten at 7-2co-fav when fifth of 8 in a hurdle race at Warwick.

Read below our recommended bets on the Mares' Hurdle 2020. Feel free to copy our Cheltenham Festival predictions and get the best odds available on the market by clicking the 'Bet' button!

Looking for the best Cheltenham Betting Account Offers & free bets? We got you covered!

What is the distance of the Mares' Hurdle?

The Mares' Hurdle is run on a distance of 2 miles, 3 furlongs and 200 yards

How many obstacles are jumped in the Mares' Hurdle?

There are 9 obstacles to jump for the Mares' Hurdle runners

What time is the Mares' Hurdle?

The Mares' Hurdle is the 5th race run on Day 1 of the Cheltenham Festival. That falls on Tuesday March 10, 2020 and the official starting time is 4:10pm.

What is the prize money for the Mares' Hurdle?

Last year's renewal was won by Roksana at SP of 10/1, trained by Dan Skelton and ridden by Harry Skelton.

What weights are carried for the Mares' Hurdle?

Who is the leading jockey in the Mares' Hurdle?

Ruby Walsh rode 8 winners in the last 10 years before retirement. All 8 of these winners was for Willie Mullins. Paul Townend took over that Ruby Walsh's position.

Who is the leading trainer in the Mares' Hurdle?

Willie Mullins has dominated this race over its 12 years. He's had 9 winners and 14 places.

No Deposit Free Spins - September 2020 - Play For Free, Keep What You Win

LeoVegas 10 No Deposit Free Spins on Book of Dead slot

Get 20/1 Liverpool To Score Vs Arsenal With William Hill

Liverpool will aim to lay down a marker when they welcome Arsenal to Anfield Road...