The Champion Hurdle is the feature race of the first day of the Cheltenham Festival, run over two miles and half a furlong. The contest is recognised as the most prestigious hurdling race of the jumps season. Gavin Cromwell's young hurdler Espoir D’Allen caused a 16/1 shock last year (we predicted it) but he will be unable to defend his crown due to a fatal injury.. Find here our Cheltenham 2020 Champion Hurdle race preview, with odds, tips, predictions, trends, free bets and betting promotions.

Are you looking for all the 2020 Cheltenham predictions? Visit our Cheltenham betting tips section here!

Join Ladbrokes today! Get a €/£1 no deposit free bet!

The Champion Hurdle is the peak test of a two mile hurdler, a combination of speed and stamina needed to win this contest. It's a Grade 1 National Hunt hurdle, for horses aged four years and upwards. It comes with a prize purse of £450,000.

The 2020 renewal looks set-up to be another cracker, with Epatante, Pentland Hills and Benie Des Dieux favorites to win the feature race.

And now we'll take a closer look at this year's Champion Hurdle and try to determine which horse is likely to prevail.

The winner of the 2017 and 2018 renewals, Buveur D’air, will miss this year’s edition after sustaining an injury in the Fighting Fifth at Newcastle.

EPATANTE was a disappointing beaten favourite in the Mares Novice Hurdle last year trailing in a well beaten ninth. She returned in style in a Listed Handicap at Newbury in November and her Christmas hurdle win at Kempton marked her down as a very smart prospect. The Nicky Henderson's superstar has been put away since then and is now rated 159 by the handicapper.

Get 40/1 Epatante to win the Champion Hurdle at Cheltenham with Paddy Power!
Claim Here
New customers only. Max stake €/£1. Winnings paid in cash at normal odds, topped up to enhanced price in free bets valid for 7 days. Deposits with cards/PayPal only. Excludes multiples & in-play bets. T&Cs apply.
PENTLAND HILLS, another horse from Henderson's stable, won the Triumph Hurdle here last season. He shaped much better than the bare result when fifth in the International Hurdle at Cheltenham last time out. He has won three of three over jumps so far, beating also Fakir D’Oudairies by a neck in the Grade 1 Doom Bar Anniversary at Aintree.

SUPASUNDAE opted for the Stayers Hurdle last year and he only finished 7th, but then went on to defeat Buveur D'Air at Aintree next time out. Jessica Harrington's horse finished 4th to Honeysuckle on his reappearance race this year.

CILAOS EMERY was a decent hurdler and won a Grade 1 contest from Melon a couple of years ago. He made a winning return to hurdling when impressing in a 2m Grade 3 at Gowran Park last January and then was not seen for nearly 300 days. He came back by winning a Grade 3 race at Naas by 9 lengths and then stepped up in class to beat Ballyoisin at Cork by an easy 7 lengths.

SHARJAH won the Grade 1 at Leopardstown at Christmas, but flopped behind Honeysuckle in the Irish Champion. On his best day, he could be dangerous.

DARVER STAR had slipped under the radar before this season and stepped out of novice company to chase down Honeysuckle in the Irish Champion Hurdle. Later on, he was close to Envoi Allen but suffered interference in the final stage of the race. The stiff finish at Cheltenham will suit and it remains to be seen where his limit lies. 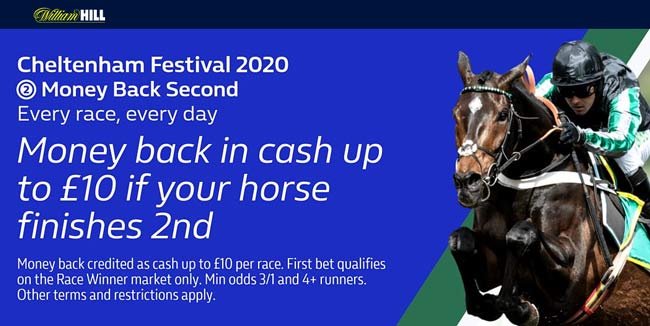 CALL ME LORD was turned over at odds-on in a Listed hurdle at Sandown (2m, heavy) at the beginning of February. Prior to that he landed in a Grade 2 over 2m1f on soft ground over Ballyandy at Cheltenham in December.

The abomentioned BALLYANDY returned to his best form when winning on the nod at Haydock last time out, and the Cheltenham hill should really bring his stamina into play in the closing stages. He will want it very soft to be able to compete at this level

FUSIL RAFFLES didn’t exactly give off the impression of a Champion Hurdler winner when battling off Grand Sancy at Wincanton and then was pulled up after a disappointing effort in the Christmas Hurdle.

NOT SO SLEEPY was seriously impressive when he made all in the Betfair Exchange Trophy at Ascot in December. He was underwhelminh in the Betfair Hurdle then but if he turns up here, Hughie's Morrison 8-year-old could be an interesting long-shot option.

CORNERSTONE LAD powered the colours of Buveur d'Air in the Fighting Fifth in November. He conceded weight and performed just as well when close third to Ballyandy and Pentland Hills at Haydock since.

COEUR SUBLIME finished runner-up to Pentland Hills in last year's Triumph Hurdle. He reappeared with Grade 2 victory at Down Royal but was subsequently beaten by Sharjah at Leopardstown over Christmas. He had wind surgery since was also tongue tied for the first time.

The following section contains our recommended bets on the Champion Hurdle 2020. Feel free to copy our Cheltenham Festival tips and get the highest odds available on the market by clicking the 'Bet' button!

Looking for the best Cheltenham Betting Account Offers and exclusive free bets? We got you covered!

What is the distance of the Champion Hurdle?

How many obstacles are jumped in the Champion Hurdle?

There are 8 obstacles to jump for the Champion Hurdle runners

What time is the Champion Hurdle?

The Champion Hurdle is the 4th race run on Day 1 of the Cheltenham Festival. That falls on Tuesday March 10, 2020 and the official starting time is 3:30pm.

What is the prize money for the Champion Hurdle?

The total prize money on offer for the Champion Hurdle at the 2020 Cheltenham Festival will be £450,000.

Last year's renewal was won by Espoir D'Allen at SP of 16/1, trained by JGavin Cromwell and ridden by Mark Walsk.

What weights are carried for the Champion Hurdle?

Who is the leading jockey in the Champion Hurdle?

Ruby Walsh rode 4 winners in the last 10 years before retirement. All 4 of these winners was for Willie Mullins. Paul Townend took over that Ruby Walsh's position.

Who is the leading trainer in the Champion Hurdle?

Trainer Nicky Henderson has won the race 7 times, including two of the last 3 years

Betting Offers (June 2020): The Best Bonuses, Promotions & How To Claim Them