The highlight of any Breeders’ Cup meeting in Santa Anita is the Breeders’ Cup Classic. A 2,000 metre (1 mile 2 furlong) dirt race for all horses aged three years and above with a $6 million prize pool This article contains our 2016 BREEDERS CUP CLASSIC betting preview including tips, predictions, enhanced odds, free bets and no deposit bonuses on the race!

CALIFORNIA CHROME is currently ranked the best horse in the world, and of course is the odds on favorite. He was beaten by a neck in the 2014 renewal here, but he has won all six starts this year including the Dubai World Cupm becoming the all-time leading North American horse in earnings won. The five-year-old chestnut stallion fell short of winning the Triple Crown two years ago when he placed fourth in the Belmont Stakes and later finished third in the 2014 Breeders' Cup Classic. Anyway, California Chrome has a $1 million bonus up for grabs for winning his last two races plus today’s Breeders Cup Classic.

ARROGATE established himself as California Chrome’s main rival with a smashing 13-length victory in the Travers Stakes at Saratoga, breaking the track record in his first stakes start. Winner of four of his five career starts to date – with his only defeat coming over an inadequate 6f on debut – he has also won both previous starts at this track.

FROSTED is best known for finishing behind 2015 Triple Crown winner American Pharoah four times. He recently He skipped the Preakness to prepare for the Belmont but ultimately lost by five-and-a-half lengths. Anyway, he won the Whitney Handicap, which granted the horse entry in the 2016 Breeders Cup Classic. This Godolphin horse has finished worse than 3rd just four times in 18 career runs. 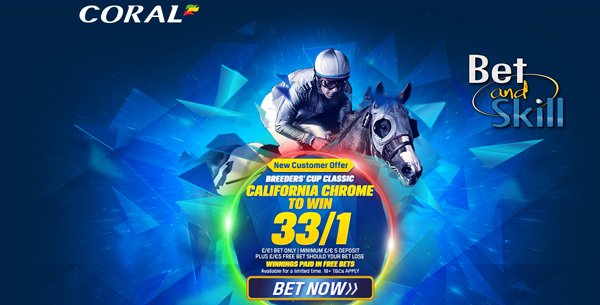 MELATONIN won the Santa Anita Handicap and Gold Cup at this track, both Grade 1 races at the 1 ¼-mile distance but he was behind last year’s runner-up Effinex back in April. Furthermore, he will be making his first start since June.

SHAMAN GHOST comes in hot with a successful 2016 run – two wins and 3rd and 5th place runs. He won the Grade Two Brooklyn Invitational from just off the pace but failed to back up in the Grade Two Suburban Handicap when fifth next time out to stablemate Effinex. Struck the big time when beating Frosted in to third in the Grade One Woodward Stakes at Saratoga.

KEEN ICE is best known for upsetting American Pharoah in the 2015 Travers. He  has only two wins in 17 lifetime starts, and he is winless since being transferred to Pletcher. Furthermore, he has not been competitive this year, his best finish a third in an allowance race in October after a six-month layoff following a trip to Dubai to compete in the World Cup.

EFFINEX ended up in second place last year, at huge odds of 100/1. He ran here in the Hollywood Gold Cup, recovering from a case of hives. He still finished third, and he has six wins since the beginning of 2015. Effinex lost his last start by a half-length to Hoppertunity in the Jockey Club Gold Cup.


HOPPERTUNITY has two wins and four podium finishes in six races. Since his fifth-place debut in January of 2014, he has finished no worse than fourth in his 21 starts since. That includes a recent win at the Jockey Club Gold Cup just this past month

WIN THE SPACE has yet to win a Grade One race but was third to California Chrome in the Awesome Again Stakes last time out.

WAR STORY has failed to post a victory in all eight of his graded races lifetime.  He finished a distant 16th at the Kentucky Derby last year and ended up a disappointing eighth in last year’s running of the Breeders’ Cup.