BetVictor has launched a Cash Out functionality for its sports betting offering and now punters have the opportunity to withdraw an active wager before the end of a match! BetVictor is already one of our most recommended bookmakers and their sportsbook is improving on a daily basis!

The offering follows last month’s launch of the new version of their iOS App (4.0) into Apple’s App store. Betvictor has also been named the official global betting and gaming partner of Premier League champions Chelsea FC.

Betfair was the first to launch the feature back in February 2011 and since then Cash Out has become a popular feature across a number of betting sites, with leading operators such as bet365, SkyBet and Ladbrokes having aready launched it for their punters.

Cash Out option gives punters the opportunity to withdraw an active wager before it has drawn to its conclusion. This can be utilised to consolidate losses and profits.

Cash Out is now available at BetVictor on various selected football markets such as:

“The introduction of Cash Out to the Sportsbook is a major milestone in terms of our development. It’s a crucial product that the modern day bettor expects to have access to, and we know that it will help us continue the sustained growth and progress we have seen, especially in our football business, over the past few years. Over the coming months we will continue to refine the initial launch product and will quickly look to extend its scope to more sports and markets as well as to innovate with new functionality.” 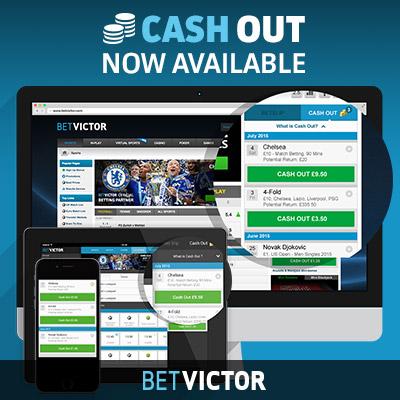