Arsenal and Chelsea go head to head in the Community Shield at Wembley Stadium on Sunday afternoon. Who will lift the first trophy of the season? Don't miss our Arsenal v Chelsea betting preview with predictions, betting tips, starting lineups, team news, enhanced odds, exclusive bonuses and no deposit free bets on the Community Shield!

Arsenal have lost their Champions League place last season, finish 5th in Premier League 2016/17, 18 points behind Chelsea. The Gunners were busy with the Emirates Cup last week as they beat Benfica 5-2 and then went on to lose 2-1 against Sevilla. Arsenal and Chelsea have already meet earlier this summer, with Chelsea running out 3-0 winners in a Beijing club friendly. As to competitive games, the Gunners beat The Blues 2-1 when they last met in the FA Cup Final back in May. Wenger's men have won the last two meetings at Wembley between these two.

Arsene Wenger has captured Alexandre Lacazette from Lyon and the French strikeropened his Arsenal account with a goal in the team’s final preseason game against Sevilla. Anyway, the summer has been dominated by reports of Alexis Sanchez moving away from the club. The Chilean is not expected to take part in this clash. Santi Cazorla, Francis Coquelin, Jack Wilshere and Gabriel Paulista are all out through injury while Shkodran Mustafi is not expected to play following his participation at the Confederations Cup, which could see Rob Holding and Nacho Monreal flank Laurent Koscielny in defence. Aaron Ramsey is rated as doubtful.

Chelsea contested some matches in the International Champions Cup this summer, where they lost against Inter Milan (2-1) and Bayern Munich (3-2) after beating 3-0 Arsenal in a friendly 3-0 prior to that. Antonio Conte's men have certainly had their defensive struggles in their warm up games as the spine of the side has to be overhauled and that could make the Blues vulnerable. Anyway, they found the net on each match so far altough Diego Costa has been exiled from the squad ahead of his likely return to Atletico Madrid.

The Blues have already replaced the departing Diego Costa with his Spain team-mate Alvaro Morata. The likes of Nemanja Matic, John Terry, Nathan Ake, Nathaniel Chalobah, Loftus-Cheek and Asmir Begovic have left the club while Willy Caballer from Man City, Antonio Rudiger from Roma and Tiemoue Bakayoko from Monaco have been signed. Michy Batshuayi had a great pre-season with three goals scored and is expected to lead the line. Eden Hazard is out through injury and will be replaced by Willian. Bakayoko and Pedro also are sidelined - the latter fractured his nose in a crash with Arsenal goalkeeper David Ospina in the friendly two weeks ago. 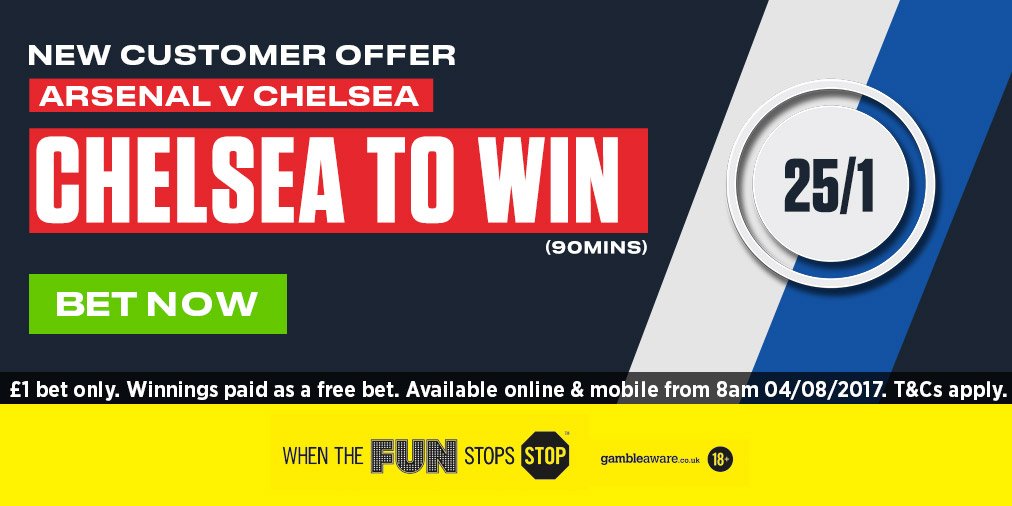 You can watch and bet on ARSENAL v CHELSEA live at bet365.com